Gosh, this is our very last official 'discussion thread'. Sniff.
The awful Cor van Kamp had even taken Charity to Brighton for the day (that should have tipped her off right there - if only she had been conversant with TUJD definition of 'Brighton' - she would have known what a cad he was. The book I reviewed last week also had a reference to the girl being taken to Brighton for the day with the cad (Loveday and Charles in The Doctor's Girl).  After fruitlessly cudgeling my brain (and then taking advantage of the search feature on our blog), I was able to find one reference to Brighton that actually features the hero taking the heroine to Brighton (A Kiss for Julie). We know that Simon is NOT a cad and does not have Brightonish designs on Julie because he also invites Julie's mum and little sister along as chaperones. Take-away? If you must go to Brighton before matrimony, take some reliable chaperones.

To fill in her lonely hours, Charity goes to a lot of museums one of which is the History of Science Museum. That sounds much more interesting than, say, a History of Agriculture Museum (I'm imagining a display of Fertilizer Through The Ages) or a History of Typography Museum.  In a barely related way, I recently watched about half of the documentary film Helvetica.  Pardon me for saying so, but it was excruciating boring.  Even my daughter-in-law who is something of a font snob found it frustratingly lame...and unbearable slow. I would expect that a History of Science Museum would have enough variety of subjects to keep me entertained for a while - but then, I'm married to an engineer.
Letizia and Teile (10-year-olds) both have checkbooks.  That seems unnecessary to me.  I'm all for teaching children fiscal responsibility, but a checkbook for gradeschoolers? The current equivalent would be for a child to have their own debit card.  My kids had bank accounts at that age - which came with debit cards...but they were not allowed to use the debit cards without permission.   In fact, they didn't get to carry their debit cards around at all until they were at least 14 (mostly for fear of losing them - my boys were not always very reliable about keeping track of such things).


Charity reads Little Women aloud to the girls (it always amuses me when non-U.S. authors (I'm thinking of Neels and Summers here specifically) talk about American books--why do I think the cultural stream (novel-wise) only flows in one direction?) 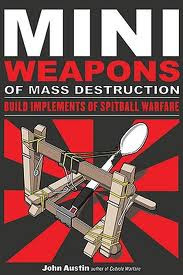 I adore the details of Charity and the twins making a doll house out of cardboard boxes.  It's adorable. Having only one daughter and five sons, I have been much more likely to make catapults out of wood and rubber bands and use foil balls as ammo (I am not joking here - I can't tell you how many catapults I have made over the years -  at home and as a den leader in Cub Scouts.) I picked up this book (Mini Weapons of Mass Destructions) on my recent trip to Portland (shh! don't tell my son-in-law - it's for his birthday), because you can never learn too many ways to make catapults. Speaking of engineers and weapons...(I was!) Here's a little engineering humor (courtesy of Dr. van der Stevejinck)
Q: What's the difference between a civil engineer and a mechanical engineer?
A: A mechanical engineer makes weapons, a civil engineer makes targets.
I did say a 'little' ...

What kind of homemade toys have you made (or had)?
Posted by Betty Debbie at 8:00 AM