The Fortunes of Francesca has a little to do with a 'Girl Friday': 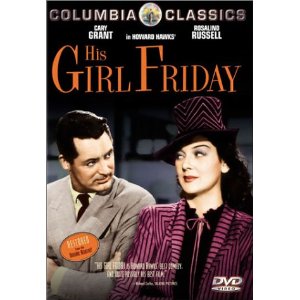 Nothing with Rosalind Russell in it ever seems to date and you all know my unrequited passion for Cary Grant even when he, as in this, is playing a cad.  Hard-boiled newspaper reporting, hiding in a roll-top desk (the first time one of those was actually useful for something) and dialog that just zings along.  It goes slightly pear-shaped when I'm expected to swallow Earl Williams (the killer) character but the movie about a man on death row happens to have very little to do with it at all.

Here's a great take on the film while the reporter is supposed to be reviewing another film:
When the philosopher Stanley Cavell coined the term "comedy of remarriage" to name those classic screwball films in which a bickering couple must divorce before they can discover that they're actually made for each other, he didn't have in mind Cameron Diaz and Ashton Kutcher What Happens in Vegas (newly on DVD!) isn't just one of the worst films of 2008, it's an insult to its venerable tradition. Praise be then to His Girl Friday (1940), which screens tomorrow at BAMCinematek, as part of its awesome Howard Hawks series. Cary Grant is his usual unflappable self as a newspaper editor whose ex-wife and former ace reporter (Rosalind Russell) is in town with her new fiance, Ralph Bellamy (whom you kids probably know as Randolph Duke in Trading Places). From their very first scene together, when Russell asks Grant for a smoke and he casually tosses a cigarette at her (they then repeat the pattern with the matches) we can see what they see in each other—and in contrast to the idiotic characters played by Diaz and Kutcher, they're not just beer goggling.


The  movie I want to recommend for The Final Touch has nothing to do with the book unless the virtue of portraying one of the hottest Dutchmen in cinema is in the RDD ballpark:

Laurent Van Horn (Paul Henreid), captain of a Dutch ship, is forced to dock at a Spanish port to make repairs to his vessel but is imprisoned by Don Alvarado (Walter Slezak), the Spanish governor, and sentenced to hang for trespassing. While awaiting execution, Laurent meets other unfairly incarcerated prisoners and together they stage a jail breakout, escaping to safety. Five years later, Laurent has become "The Barracuda," an infamous pirate who plunders Spanish ships. When he learns that Francesca (Maureen O'Hara), Don Alvarado's bride-to-be, is arriving by boat from Mexico to be married, he sets a trap, abducting her and setting in motion his revenge for the governor's past mistreatment of him.
Honestly, doesn't that just make your eyeballs scorch?
Henreid was personally responsible for that change of pace. He came up with the story line in an attempt to change his image. "The search for challenging movies that would change my image as an actor finally made me decide to write out a quick treatment of an idea that had been simmering in my mind for a long time. I was getting tired of being cast as the suave ladies' man...so I started to think in terms of something that would be more fun, a swashbuckling part in a pirate film."
I adore Paul Henreid (even though he's Austrian and not Dutch at all).  You should totally try to check this out.
Posted by Keira at 5:00 AM