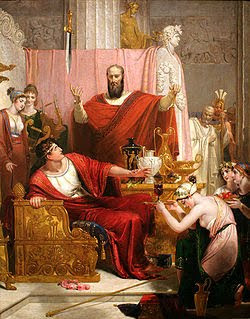 Wish With the Candles:

Emma wonders if Damocles's Sword has fallen when she crashes into the Professor's Rolls Royce, her door sticks and the police show up:

The Damocles of the anecdote was an obsequious courtier. Pandering to his king, Damocles exclaimed that, as a great man of power and authority, Dionysius was truly fortunate, as it was "good to be the king." Realizing the folly of this courtier, Dionysius offered to switch places with him for a day, so he could taste first hand that fortune, albeit without the real authority of being king. (That is, Damocles could not start wars, etc.) The King required only that Damocles sit in the king's throne for the entirety of the day. Damocles could think of no other place he would rather be and quickly accepted the King's proposal....(One the day they switched, Damocles) realized there was a huge sword hanging above the throne, and his head, held at the tip only by the single hair of a horse's tail. Damocles immediately stood up and moved away from the throne. The king, standing nearby, quickly reminded Damocles of the contingency that he agreed to remain on the throne for the full day.

On Emma's return from Holland, she is kept awake by a group of older travelers singing Knees Up, Mother Brown--It was also the inspiration for the song "Step in Time" written by the Sherman Brothers for the Walt Disney film Mary Poppins.

Justin's home has a couple of ugly Late Louis Seize--Gouthere vases. (Accent over that first e in Gouthere.) Google Image search failed me utterly which is a pity because The Great Betty has Justin say, 'We are used to them, but people seeing them for the first time are rather taken aback.'


An Apple From Eve:
Our heroine owns a Moorfields rug with a hole in it that our hero suggests she might have patched. 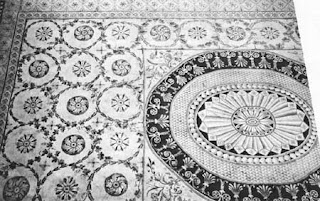 Moorfields (1752–1806, owned by Thomas Moore, 5 extant carpets) (Does this mean that all the others are knock-offs or that the 5 are just from the original factory or that our heroine is walking all over a priceless antique?)

Exeter and Moorfields were both staffed with renegade weavers (!) from the French Savonnerie and, therefore, employ the weaving structure of that factory and Perrot-inspired designs. Neoclassical designer Robert Adam supplied designs for both Moorfields and Axminster carpets based on Roman floor mosaics and coffered ceilings.