Word of the Day 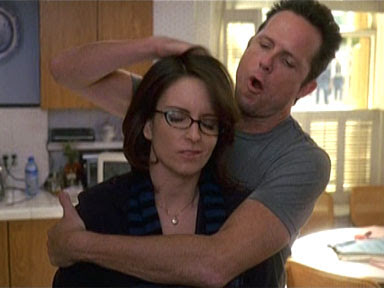 Marry me, Phoebe! I'll shower you with bleeps!

She had barely sat down when her bleep started up-Childen's this time, and could she go at once because Baby Crocker had started a nasty laryngeal stridor.

This is one of those words that I think I know. It sounds like she's describing a 'beeper'--but does this mean that she had to make a phone call to get the additional info or was it more like a walkie-talkie? Hmmm. Not sure. Maybe someone who knows the technology better might tell me?

One of my favorite bits involving a beeper (can't say 'bleep' as it makes me think I'm covering up an obscenity) is from the TV show 30 Rock. Liz dates someone who earns his living selling an outmoded technology. (He was the last remaining beeper salesman in New York City and was known as the "Beeper King" since the original "Beeper King" killed himself.)
Posted by Keira at 5:00 AM