Magic in Vienna had an emergency appendectomy (with Eileen's uncle doing the anesthesia) which isn't the same as getting tonsils out but it'll have to do.
Cheaper By the Dozen (1950) 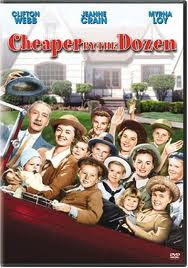 Father realizes that getting tonsils out all in one go would be better than piecemeal and when one daughter (thinking she's going to get out of it) gorges herself on food that morning, it's so much worse for the anesthetist.
There are no large families in Magic in Vienna but wouldn't it be better if there were? Eileen wouldn't be so 'spoiled' (Betty's word), Sal (with a sister about) would have been told where to get off if she wanted to leave her child for two years, Cordelia would have had someone to turn to instead of being a slave to the steps, Charles wouldn't have been allowed to be so abstracted and bookish...

Betty Debbie felt that Tangled Autumn had a vibe reminiscent of:
Kiss Me, Kate (1953) 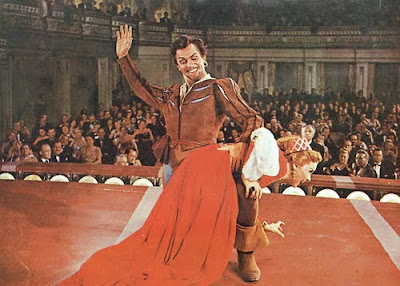 Satyr, pirate, brigand,...was there anything else?

Howard Keel's eyebrows are certainly satyr-like and the prickly relationship between him and Kathryn Grayson is so very Sappha/Rolf. If only to see the utterly charming Ann Miller and her legs that go up to there singing Too Darn Hot in a scene reminds me of that Manet painting where some nattily-dressed gentleman are picnicking with a stark naked woman. Ann Miller is not the kind of lady who minds being the only one wearing a sequined bathing suit to a dinner party.
Posted by Keira at 5:00 AM