Lots to discuss in this book--many delightful bits but plenty to take issue with.

Gold Medals seem to run in the family. Pheobe Brook, 27, Medical Night Sister, was the leading light of her year and little sister Sybil has just garnered the top honors as well.
Even though the title of the book references Sybil's wedding and it is that same wedding that gets the ball rolling, Sybil is practically a cardboard figure--a hodgepodge of 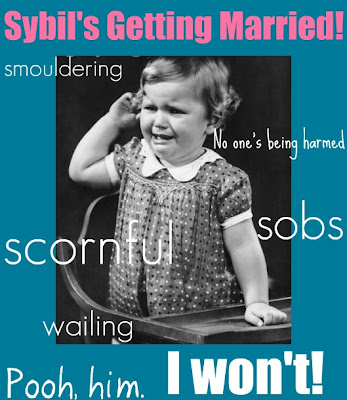 enthusiasms and tantrums ('I can't spend two whole months in Holland! I want to get married! Revolve around me!') and never really gets fleshed out.
Sybil wants to get married and a nurse-training scheme in Holland is getting in her way. So, instead of accepting responsibility for her own actions and telling the hospital authorities that Nick (we're supposed to believe that marriage with a 'Nick' will turn out well?) has proposed, she asks Phoebe to take her place and pretend to be her. Phoebe brings her considerable logic to bear on the situation but Sybil demonstrates her preparedness for marriage thus: 'Oh dear,' she wailed through her sobs, 'now I don't know what I'll do--at least, I do. I shall run away and hide until Nick goes to Southampton and we'll get married in one of those pokey register offices and n-no one will come to the w-wedding!'
Have I mentioned that she's 23?--not 12. And one must assume she won her Gold Medal with hard work and diligence--Well, that or her class was peopled with the criminally moronic, deaf-mutes and dope fiends...Hmm, there's a thought.
So Phoebe agrees.
Phoebe is told only that the doctor in charge is one of those catatonic fellows--sleepy and uninterested. He couldn't possibly remember Sybil from the one time he met her. But he does--at least enough to know that for him she was just another nurse. Phoebe (masquerading as Sybil) however, is, as he scribbles in his ubiquitous notebook, 'A darling English girl. I shall marry her.' Maybe it was the good deal of leg she was showing as she leaned out the window...
Editorial Note:
Mind you, he knows right away that she's not who she says she is and still falls headlong into love. I adore that he's nerdy enough to need a reminder.
But Dr. Lucius (I'm thinking of a chubby Southern boy circa 1952 with horn-rimmed glasses and an overbearing mother) van Someren, 34, is supposed to be married so despite finding him very attractive, Phoebe resigns herself to aesthetic appreciation and philosophical detachment. (Sybil's Nick (who probably, with a name like that, has a criminal record of some sort) told her he had a son so naturally...) 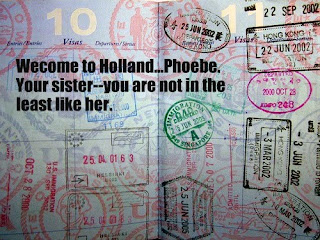 They settle down to a wonderful working relationship. She's a good deal more experienced than a recently-graduated student nurse has any right to be but he is unobservant, right?
Wrong.
The moment he gets her across the Channel and onto Dutch soil (where, conveniently it would be difficult for her to beat a hasty withdrawal) he calls her Phoebe.
Right. About that...
No harm, no foul. He's happy to have her anyway and will even arrange for her to go back to the wedding when her sister ties the knot.
That's a sticky plot morass cleared with almost unseemly haste. We may proceed.
On one of her solitary rambles about Delft she is roughed up by a group of 8-year-olds. Before you go calling her a pansy keep in mind that she was very likely in high heels and they were swinging book bags. (My daughter's could probably take an arm off if swung just so.) One of the young vandals, she was sure, was able to understand her English shouting. Curious.
Lucius, inviting her and another nurse, to coffee at his home (after some fibrocystitis-themed sight-seeing) where she is introduced to (Dum, dum, DUM) Paul--8-year-old hooligan by day, adopted son of Lucius by night! Phoebe offered a hand and smiled. Little boys were, after all, little boys and what was a rude gesture between friends? (Don't you just want to wrap her up and keep her in your pocket?) 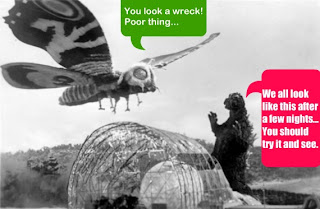 She also meets Maureen Felman, a dishy and smug-faced governess. Their dislike is mutual, thorough and instantaneous. (Think Godzilla vs. Mothra) Of a later meeting it is said, 'Here was the enemy, although she wasn't quite sure why (no Dawning Realization yet)--and declaring war too.
But the doctor isn't married. That's the other disclosure of the day. Phoebe is thrilled--she isn't in love with him (well, she is but doesn't know it) but there's a rose-colored intermediary state where she admits to liking him an awful, awful lot.
She goes on night duty and her one compensation is that Lucius picks her up in the morning and they go swimming together in the North Sea. This is Betty Neels code for 'Delightful Post-Work Pick-Me-Up' and Betty Keira code for 'Are You Insane and Trying to Kill Me?' Paul and Maureen come sometimes which is just as fun as it gets with Paul staring at her with dead eyes and Maureen using her as a scratching post. Are there dueling dishy swimsuits? Heck yes.
Phoebe goes back to England for the wedding which I thought we already agreed was a next-to-useless detour. Oh, she gets to wear a pretty hat, find herself uninterested in an old boyfriend and then (finally, at last) unmuddle her way into a dawning realization.
Back in Holland she runs into Paul, unusually verbose and wanting to show her around the town. What's that expression? Beware of Greeks bearing gifts. Paul bolts her into an abandoned warehouse.
Let's just sit right there for a spell. 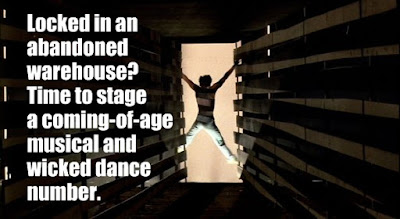 Paul. Locked. Her. In. A. Warehouse.
By the sheerest good luck, Lucius remembers a Squirrel-y Paul from lunchtime and manages to wring her location from him (but only after witnessing his governess lazing about with glossies and booze--not for the first time, mind you). Phoebe, meanwhile, has been amusing herself with morbid scenarios including tramps and hippies (yes, hippies and not the fun kind) and, when he arrives, bursts into tears on Lucius' waistcoat.
'Paul is at home, he will want to apologize to you.' 'Some other time--it surely doesn't matter....' 'Am I to infer that you have some reason for not wishing to meet Paul?' 'Of course not.'
Yeah, it's not like he locked her away and hoped she would starve to death or anything...Oh. Wait.
So she has to go (after such an ordeal) and smooth everyone's ruffled feelings which reminds me of those times when my toddlers have, through sheer carelessness, caused me bodily injury (usually by banging a toy into my head or something) and I've cried out only to find them so stricken by my reaction that they fall to pieces and I have to comfort them. Being a grown-up stinks.
Lucius is making steady progress though. He's kissing our sweet-in-the-face-of-uncertain-odds heroine and dating her often. During one meeting he asks what he should get Paul for his birthday. (See, he's trying to involve her in parenting decisions.) Some mice, she answers, or a dog. (Or boarding school or detention or a cruise around the world...)
Paul thaws considerably when presented with a new (new to him) puppy but Maureen isn't going to take that kind of broadside lying down. (She's been poisoning his mind all along against Phoebe and making threats.) 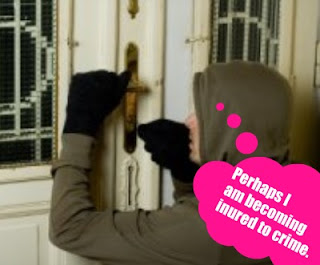 Phoebe walks in on her beating the poor thing to death a few days later. He doesn't die and Maureen concocts some cock-and-bull story for Lucius about a door left ajar and an auto run-in. Phoebe does not contradict or correct her. She doesn't even put her finger on that bony chest and tell her where to get off.
The final act in this little melodrama is when Paul comes to Phoebe a few days later when his father is out of the country. Maureen has locked the dog...oh, heck. She's just evil.
The conspirators break the little dog out of Puppy Prison, flee to Lucius' old nanny's house in Amsterdam (yes, she takes a child away from his home and travels to another city without telling his father) and await The Great and Terrible Day of Judgment.
Maureen has poisoned the well. Lucius thinks Phoebe is a kidnapper. Impolitic words are exchanged. But then we get a swimmy denouement in front of the kitchenware display of De Bijenkorf department store.
I lost my temper--I don't often do that, Phoebe, but you see while I had been in England I had dreamed--oh, a great many dreams.
The End

Rating: I don't re-read this book very often and I thought it was because I didn't like it very much but I find that that's not entirely true. I love the meeting between the principles and accept the absurdity that a 27-year-old woman would let herself be talked into a plot device more worthy of a Disney film. I love the professor, whose working life we get to see more of than is normal--he cares deeply about his patients and is driven to cure them--and he's not as absent-minded as he lets Phoebe believe he is.
Phoebe comes off as a darling but way too closed-mouthed when it comes to the Assorted Evils of Maureen. What/who does she think she's helping by not ratting her out?
Also, I have a problem with Lucius' failure to connect the dots on Maureen--or maybe, I'm annoyed that The Great Betty brings up such weighty issues such as beating a dog to death, trapping a grown woman in an abandoned warehouse and the years long brain-washing and neglect of an innocent child without truly adequate wrap-up. I can't enjoy hating Maureen because I'm worried about all the fall-out.
On those grounds I give this a Madiera Cake.
That said, I adore how gradual and obvious Pheobe's love is for Lucius without her being aware of it and I love all those trips to the beach.

Fashion: Again, there isn't as much here as in some Neels but The Great Betty uses it to contrast Phoebe and Maureen with a deft hand. Phoebe wears an uncrushable cotton dress and takes 2 swim suits to Holland, wears a delicious-sounding strawberry pink silk number, and she packs a 'pastel patterned party dress which could be rolled into a ball if necessary and still look perfection itself'--as 'a concession to a kindly fate'. She also buys a French silk scarf and laments that she could be wearing 'hot pants and a see-through top' for all the notice he's taking of her. Maureen wears a scarlet and white beach outfit, false eyelashes, and an artlessly simple white dress with gold sandals.
Posted by Keira at 5:00 AM