In Ring in a Teacup we get another one of those large age-gaps. Fraam is nudging 40 and Lucy is 23. I'll be honest--it doesn't fuss me as my danged husband is only getting better with age and I think that Betty (in her later years) just couldn't find a young man attractive. But it is more problematic for others who prefer to ignore this facet and focus on other more lovable points in the books. Maybe they imagine it away as I used to imagine away the lint fair hair.
But I digress...
Large age gap and charming story? My pick is:
Margie (1946) 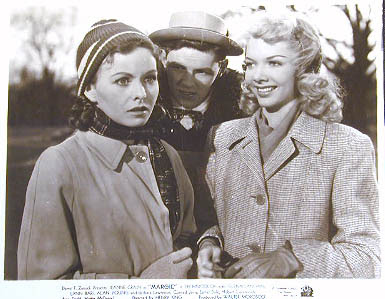 "What are you saying Mies?"
"I am amazed, Lucy--Fraam has had eye only for Adilia, who is beautiful..."
Margie is the awkward odd-man out and her gorgeous friend always gets the dates. But there's a new Dutch doctor....er...French teacher at the high school who doesn't mind that she's a bit off and that her bloomers seems to keep dropping (yes, really).
The End of the Rainbow:
Olympia is treated as though she is a lower class girl by the villainess and that Waldo, in bringing her home, was just slumming it. On the strength of the class warfare angle, I recommend:
Chance at Heaven (1934) 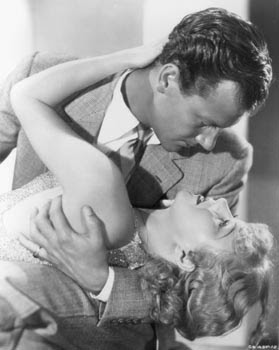 Never fear, I'm a doctor. If you pass out in this position I'm prepared to revive you...
Joel McCrea (who I have never loved, to be honest) is a gas station attendant who falls for a socialite and dumps his working class girl. Ginger Rogers (the low class drudge) does her plucky best to keep their (Joel and the socialite) ill-fated marriage together--doing charming things like making supper for them and letting the rich girl get the credit.

One review calls it 'an innocuous domestic tangle', which, though couched in mildly patronizing words, is just what a Betty Neels novel is.
Posted by Keira at 6:00 AM