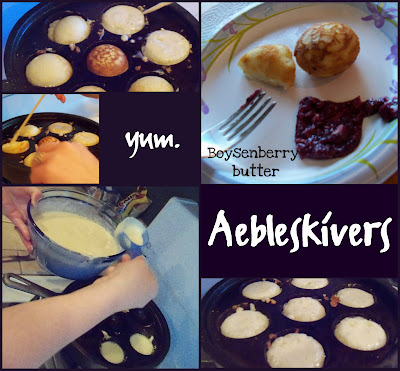 If you'd like the TSA people at the airport to take a second glance at their x-ray pictures, just pop an aebleskiver pan in your carry-on. It worked for Betty Tia.

On our recent trip to Colorado, Betty Keira and I convinced Betty Tia that she should bring her aebleskiver pan and make aebleskivers for Easter breakfast. Yes, you could say that we ganged up on her, but hey, that's what big sisters do. Betty Tia is the acknowledged aebleskiver pro in our family. I don't know that I ever had them before. Mom 1.0 had very Southern roots, so while we sometimes had beignets, we never had aebleskivers while I was growing up. Heck, I had never even heard of them until a few years ago. Mom 2.0 has aebleskivers in her blood. The recipe that Betty Tia uses is from Mom 2.0's mother.

To start: separate eggs and beat the whites stiff. Mix the first and second set of ingredients together real well and then fold in the egg whites. Have your pan hot. In each hole put 1 tsp. Crisco. Melt and place 1 Tbsp of batter in each cup. Start turning with stick when bottom is done. Remove when done and sprinkle with powdered sugar. Serve with jam recipe below.

Verdict: I'm going to keep my eye out for an aebleskiver pan...I loved them. Little balls of goodness. Even though I was pretty sure that I hadn't ever had them before, I did have something similar in Japan - they were cooked in almost the exact same fashion. The Japanese ones had chunks of octopus in them. I somehow doubt that would go well with jam.
Posted by Betty Debbie at 2:00 PM