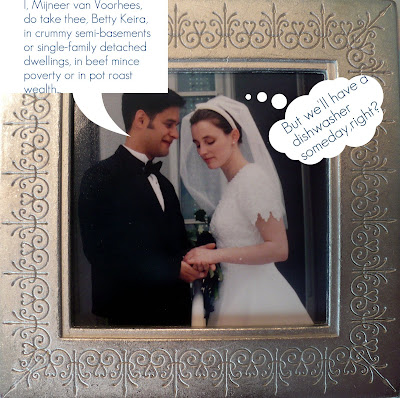 Phillip. Persistent, worthy Phillip. When Phyllida turns him down (which she should have done the moment she heard their names together "Phillip and Phyllida sitting in a tree. K-I-S-S...") she tells him that she wants to be "so in love with the man that nothing else matters; there'd be no doubts and wondering about the future and where we'd live or how". He calls that a fairy tale but let's go down the list of things that didn't matter and never mattered when I married Mijneer van Voorhees:
This, Phillip calls an immature outlook. --There's no such thing as that kind of love, only in romantic novels. Oh, Phillip. Being in love and hard up has its compensations. You're such a gomer.
Those rotten parents of Gaby--where to start? They say these words within moments of finding out their daughter is dead, "It isn't as though she were our own daughter. We adopted her as a baby..." The Founding Bettys come from an adopting family. There is nothing that makes this Betty see red quite like being asked if x, y, or z (not their real names) sibling is a "real" sister. Generally, there is no other response to make than to assume the mantle of Queen Victoria and ask, "What do you mean, "real sister"? Were it possible to reach through the book and give Mr. de Wolff a pop on the nose, I'd have done it. In the end, I felt horrible for Gaby having such terrible narcissists for parents and was only happy that, as they had to be her last weeks, she got to spend them with a cool chick like Phyllida.[Betty Debbie] The casualness of Mr. and Mrs. de Wolff over their daughter's (ADOPTED daughter) illness was gob-smacking. It's like Gaby was a toy - and now that she was "defective" it was time to discard her.
The names of Phyllida's siblings are Willy ("She wouldn't have a Willy or a Sam--no Sam!"), Dick and Beryl. You know, for someone who loathed ponderous, looming, Victoriana, The Betty sure loves her some Victorian names.
While aboard 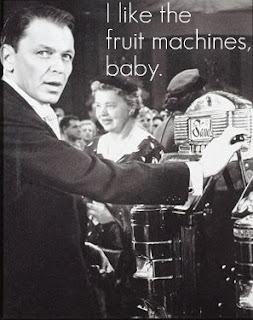 the cruise ship, the doctor "has an urge to play the fruit machines". I am thinking that they're slot machines and can't imagine anything less like what a Betty hero would be interested in. For that matter, Pieter also goes tobogganing down that slope which also seems a little out of character. Usually our heroes stand more firmly on their dignity but I suppose Pieter is cut out of appealingly boyish cloth. It's also a bit of a middle class thing, yes? (both the tobogganing and the slots) 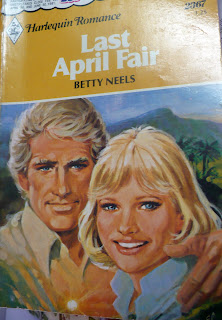 Pieter's father retired some years ago and moved thankfully close to a golf course--he enjoys a game. Which makes him sound like some New York, pinky-ring wearing doctor who has sold his cosmetic surgery practice and moved with an artificially blonde wife named Cindy down to Boca Raton. Is this the only time La Neels lets her doctors (retired or otherwise) play golf? [Betty Debbie] This puts me in mind of Betty Sherri's in-laws...he is a retired anesthesiologist - and they live on a golf course. It's definitely not middle-class, but it does seem more than a couple of pegs down from a stately home - which is what all RDD's live in.

Cover art. This just isn't working for me. They look like siblings, for one thing. Also, Pieter is flashing gang signs with his hand and his heart is glowing like E.T., while his eyebrows look like carnivorous bats. And is it just me, or does Phyllida look like she's sending a message in Morse code with her eyes? ("Help!") I've been reading some of Betty Keira's Essie Summers books...the cover art on them makes this one look like it was painted by Michelangelo.
Posted by Keira at 8:00 AM