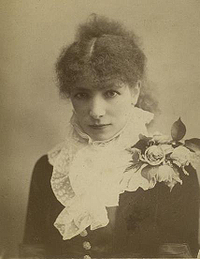 Fabian's Cousin Emma has quite the flair for dramatics. At one point she strikes a pose worthy of Sarah Bernhardt. Wow. Her wiki article is worth a read: sleeping in a coffin, bearing a child to a nobleman who only proposed marriage when the son was born (she gave the lost-in-the-sands-of-history nobletwerp up because his family persuaded her to but I prefer to think she had too many brains to marry a man with such obvious dynastic obsessions), developed gangrene after leaping from a parapet (in a play) and had her leg amputated...and continued to act for at least another 7 years! I had always thought of her as British (her name struck me that way which is silly because Bernhardt is clearly not English) but she was French. (Oui!) 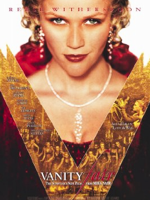 Emily reads Vanity Fair to Lucilla. They both agree that "Amelia Osborne was the most tiresome milksop that ever walked". Here's the wiki run-down of her character:

Amelia is the heroine: pale, passive, and emotionally devoted to her husband and son. She marries George Osborne against the wishes of George's father, and when George dies at the battle of Waterloo she brings up little George alone while living with her parents.

After George Osborne's death, Amelia is obsessed with her son and with the memory of her husband. She ignores William Dobbin, who courts her for years, and treats him shabbily until eventually he leaves. It is only after Becky shows her George's letter to her that Amelia realizes what a good man Dobbin is, although she has already written to him to ask him to come back. She eventually marries Dobbin. 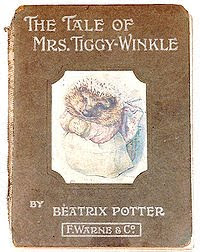 Uh, she does sound a drip. I have a copy of Vanity Fair sitting at the bottom of my to-be-read pile where it has started decorating and paying a mortgage. I'm always meaning to read it. I can't say this makes it any more likely...

The hero has a housekeeper reminds the heroine of Mrs. Tiggywinkle (Tiggy-Winkle). Wiki to the rescue!:

The story of Mrs. Tiggy-Winkle had its origin in Kitty MacDonald, a Scottish washerwoman the Potters employed over the course of eleven summers at Dalguise House on the River Tay in Perthshire. Potter was 26 when, in 1892, she visited MacDonald while staying at Heath Park, Birnam. She wrote in her journal: "Went out with the pony ... to see Kitty MacDonald, our old washerwoman ... Kitty is eighty-three but waken, and delightfully merry ... She is a comical, round little woman, as brown as a berry and wears a multitude of petticoats and a mutch. Her memory goes back for seventy years, and I really believe she is prepared to enumerate the articles of her first wash in the year '71."
Posted by Keira at 7:00 AM