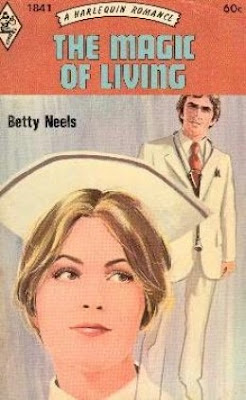 Leave it to The Mighty Betty Neels to incorporate spastic children into the plot of her mid-seventies romance novel. And not only spastics (which here does not mean your little brother dancing around in your bra) but a stutter too! Is she successful? Did Houdini do card tricks? Heck yes.

Arabella Birch, 22, is a student nurse--orphaned at a young age and raised with her cousins in the care of Aunt Maud and Uncle garblemumblewhocares. She has unremarkable features and pale brown hair--a gentle kind of beauty which, next to her glamorous cousin Hilary, looks like an adorable pair of China flats cast off for some four inch Manolo Blahniks.
Arabella lets the readers know a couple of facts about her family: 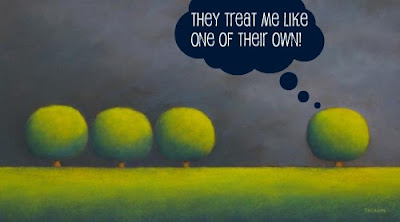 Editorial Note:
Many years ago I read a criticism of some literature that said, in essence, that the author did too much 'telling' and not enough 'showing'. In this case The Great Betty (at her most genius) has Arabella tell us a lot of nonsense and then quietly shows us how the family really treats our heroine.
So let's find out what home life is really like: 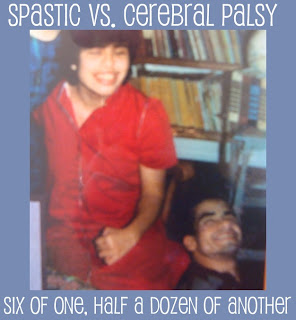 So, all in all it's not dungeons, short rations and daily beatings but Arabella hasn't got a clue that she's being used. Not one to play dirty tricks on others, it is inconceivable that she might be treated so.
Hilary, in order to carry on an inexplicable flirtation with a man whose marital status, eye-wear and awkwardly hyphenated name (married, hornrims, Thisby-Barnes) make him sound like a booby prize, wheedles Arabella give up her holidays in order to take her place ushering a busload of spastics to Holland for a summer camp. Sing with me now!
Editorial Note: The Founding Bettys actually have a few siblings whom The Venerable Neels would have classified as 'spastic' but it's not a word people use anymore (at least for any medical condition)--preferring often to use the term cerebral palsy. So, please understand, if I'm laughing (and I am) it's only at the term.
Hilary manages to hog all the limelight 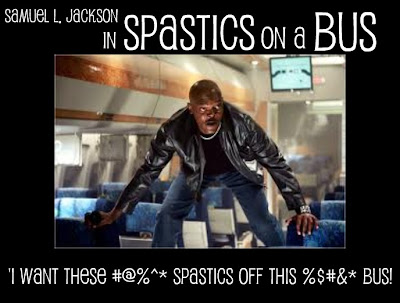 and then sends the busload of spastics on their way.
Arabella is managing just fine (even though the other nurse is worse than useless) when the driver up and dies. He dies!
Arabella hastily grabs the wheel to avert an oncoming car and lands them in a ditch. (All this is more heroic and skilled than that just sounded)
But this is Holland and you can't swing a dead cat around without hitting a dishy Dutch doctor. Dr. Gideon van der Vorst, 38, peers at all her gentle loveliness from his perch on the side of the bus and commences the evacuation.
He is witness to her good sense, infinite patience, correct priorities, calmness, helpfulness, good scout-ery and stammer (which doesn't bother him a jot...Honestly, maybe every married pair should meet during a crisis.). She weathers a rescue that resembles something out of a muppet skit.
Gideon quotes some Shakespeare at her ('She has brown hair and speaks soft like a woman...') and takes care of getting everyone to the hospital. 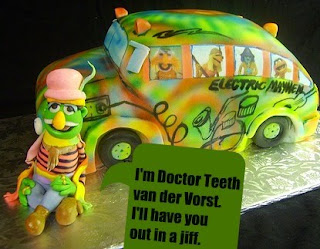 Everyone is fine (except for, you know, the dead fellow) aside from Billy and Sally--they both broke some bones--and will be sent back shortly. Gideon suggests that Arabella bring them to his home for the remainder of their convalescence. She wonders if his wife will feel it inconvenient.
Well, no. He's a bachelor. His little sister Larissa is there to play propriety. (Because Billy and Sally can't move fast enough to break up a spot of late-night snogging, I suppose.)
Editorial Note: The one sentence that best encapsulates the nature of her stay at his home is about an ordinary tea in the sitting room: '...they talked comfortable nothings.' Arabella's stammer almost completely disappears when she is wrapped up in the peaceful cocoon of the doctor's house. A lot of other stuff happens during this relatively quiet time but it is mostly an interlude where the principles are enjoying one another enormously--kissing too. Tellingly, Arabella mentions Hilary (her wonderful cousin Hilary), hardly at all.
But it can't last forever. He returns her to her British hospital after a couple of weeks. She knows that Gideon likes her but not much else. And then Hilary, tripping down the stairs in a blinding glow of mendacious solicitation, meets the doctor. Arabella can see the castles in the air she built up over the previous weeks begin to show signs of structural weakness. 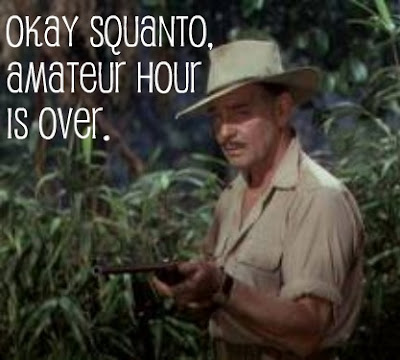 Hilary, up to this point, has been more or less benign--sure there's a pit where her heart should be but she's not been cruel to Arabella, merely unfeeling. And she's not trying to be cruel now (or maybe not trying very hard). Arabella, to her, is a native guide and having lead the Great White Hunter (Hilary) to the herd of wild rhinoceros (RDD) it's time for Arabella to cartoonishly clap her hands over her ears in anticipation of the .50 caliber rifle taking down that noble beast with alacrity. I can almost see her adjusting her bodice and heading into battle.
For his part, it helps the plot tremendously if you understand that Gideon is at first happy to meet Arabella's cousin. All that charming 'Darling-are-you-alright' and 'I'm-sorry-you-had-to-go'-ness is just how he would like to believe Arabella's family would treat her. He agrees to let her make a third in the car as he drives them home for a four day break. See, he thought there was real affection between them and can't make it out at all.
Arabella, the scales now ripped from her eyes with a vengeance, is furious. She sees Hilary as she is and for the first time her stammer becomes a real obstacle to sorting out misinformation (Hilary is practically a one-man Minister of Propaganda) and beating her cousin to the punch.
Editorial Note: I'm not about to spoil the machinations of Hilary the Depraved but, sufficient to say, a close reading will show that the doctor recovers from his Hilary-blindness (which never included attraction even a little) toot sweet. He continues to be around her only to gain access to an increasingly elusive Arabella. 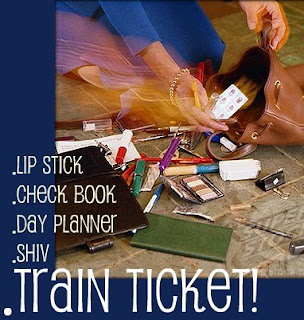 But then Hilary makes a fatal mistake (ah pride, that most deadly of sins) when she tells Gideon that she has to go home to nurse a nigh-on-dead Nanny Bliss. Never mind Arabella--she didn't want to come anyway. She wanted to go shopping!
Which all leads to Gideon practically kicking down Arabella's door (in the nurse's home, mind you!), flinging around plenty of unjust accusations and taking her home to visit Nanny Bliss (who has been calling for her from her perch on the edge of death's door) whether she wants to or not.
The mortification on his face when he realizes that she had a train ticket for the earliest possible trip the next morning ought to give a happy glow for readers who like their Neels heroes to have to dig themselves out of craterous holes with back-hoes. The one benefit is that Gideon won't be fooled by Hilary's lies again.
His next act is to verify that Arabella is not, in fact, interested in the local rector's horrible son as Hilary has hinted (the scene is awesome--Gideon reassures us readers that he knows Arabella so well that one glance at Bertie Palmer Hateful yet Innocent By-Looker is enough to tell him that he's so not her type), engineer a theft of Arabella's passport by delightful means and to abduct her to another country.
Kissing and explanations and Dutch lessons follow.
The End


Rating: The last line reads like that short story Diana Berry submitted for Anne Shirley ('Sweetheart, the beautiful coming years will bring us the fulfillment of our home of dreams...in which we will never use any baking powder except Rollings Reliable.') in that it seems bluntly shoehorned in to fit a just so-so pre-selected title.
But what a silly quibble! I love this book.
At first blush you're thinking, 'Stammer? Really?' Yes, and The Great Betty uses such a skilled hand that you'll be falling in love with it right along with Gideon.
The doctor is so darling. Just when you think that maybe he loves Arabella out of a sense of misplaced pity, our beloved authoress gives us a peek at how much he really needs her. He is charmed--completely charmed.
I felt that Hilary was such an interesting character--not cruel, according to her lights, to Arabella, just horribly self-involved and frank about her goals. She probably would make a good wife for a man willing to spoil her and reconfigure the planetary orbits so that everything revolves around her.
This one earned a lashings of whipped cream and then some...

Food: Arabella struggles with the Dutch breakfast (bread, butter, cheese and jam) as it seems such a poor compromise for hearty English fare (porridge and bacon). Gideon likes rich fruit cake. We get Peach Melba and apple chutney. He brings her champagne when she's pretending to sleep in the car but when she arrives at home everyone sends her to bed--in a rage she drinks some cooking sherry, eats a couple of bananas and has some bread and butter. The lower class Mrs. Burns serves tea laced liberally with condensed milk.

Fashion: Arabella is relegated to shabby tweeds, fawn-colored raincoats, and severe hats because, as Aunt Maud says, 'Plain hat for a plain face.' She owns a jersey dress of honey and cinnamon stripes (love The Great Betty's culinary descriptions), and (in the best shopping trip in the history of Neels) she is persuaded to buy a coral PVC mac 'with a decided swagger', a corduroy pinafore and a coral and brown striped wool dress with a flared skirt. He also gets to see her in her pink quilted dressing gown for good measure.
Posted by Keira at 5:00 AM