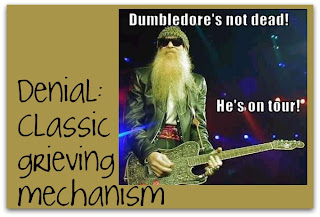 When Mary Jane stoutly says, 'Anyway, Grandfather isn't going to die', one of Fabian's more detestable comments is 'I am surprised that you, a nurse, should talk in such a fashion--you surely don't think that the Colonel wishes us to smother the truth in a froth of sickly sentiment.' Sympathy for someone who is grieving is, admittedly, thin on the ground in Neeldom, but Fabian's comment takes lack of sympathy to a whole new low. If I had been Mary Jane, this would have been my cue to throw something substantial (and possibly sharp) at Fabian. Evidently Fabian was not familiar with the Kübler-Ross model (five stages of grief). Mary Jane is in classic stage one - Denial. 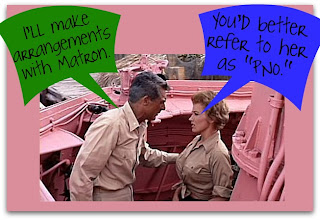 an is sorry that progress has lead to Hospital Matrons being called Principle Nursing Officers. I'm with him on this one. 'Matron' is quicker and easier to say than 'PNO' - which sounds more like the rank of a crewmember on a naval vessel.

Neels heroes are usually so unerring when it comes to ordering what the heroine likes. But Fabian gets her a dry sherry when she would have preferred a sweet one. In most of Neeldom, this would be the kiss of death for their relationship.

'They kept up desultory conversation as they ate--the kind of conversation, she told herself hopelessly, that one sustained with fellow patients in a dentist's waiting room...' Winter of Change is a difficult book but it has many of these sort of charming observations sprinkled in, which is just about the only redeeming feature of this book...to me.

Fabian drives a silver-grey pre-war Jag SS 100...not original but a modern version of it. Cousin Mervyn drives a Ford Capri. I'm not quite sure what to make of Fabian's car. Is it a replica? Perhaps he bought it as a kit car? If it's a replica then I'm afraid it falls smack in the middle of pretentious ostentationess. Cousin Mervyn drives exactly what you would expect a slimeball from Winnipeg to drive.

Fabian guesses her measurements accurately! 34-22-35..or 6. He must either have a pretty keen eye, or lots of practice at guessing measurements. Or both.
Posted by Betty Debbie at 8:00 AM