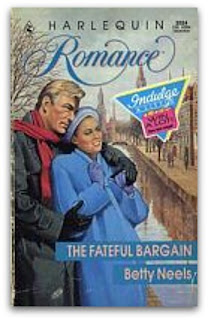 I thought I had a bigger problem with the questionable medical ethics involved in The Fateful Bargain, but frankly it didn't bother me. If I was in Emily's shoes I would have jumped at the chance for my dad to get off the National Health Carousel of Depression and Pain even if it did mean a couple of months babysitting a sulky teenager. Cheap at the price.
Emily Grenfell, age 23, is a second year nursing student. She runs full tilt into a handsome stranger on her way home from working the night shift. She confides in the stranger that she's afraid to meet the visiting honorary, a Dutch surgeon, because a French honorary yelled at her and she's a bit gun shy of foreign doctors. The very next day Mr. van Tecqx (I do apologize...that's his name - Emily does not call him anything different until The.Very.Last.Page.) 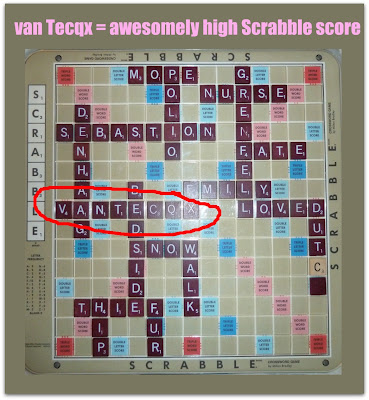 takes a detour in the hospital just so as to get a glimpse at Emily. Sweet, right?
Emily sees Mr. van Tecqx on the Orthopaedic Ward - as he's doing rounds. He later tells her that it's difficult to pretend he doesn't see her. Mr. van Tecqx asks Emily out - so that they can exchange life histories. She's not quite sure what to make of that, so she has a go at sneaking out the side door - only to find him waiting. "I am much encouraged to find that we think alike - you, that you would escape by this door, and I quite certain of it."
He also does a bit of sleuthing and discovers the sad truth about Mr. Grenfell. The fact that he is crippled with arthritis and in great need of hip replacement surgery, but nowhere near the top of the waiting list. In fact, it's going to take Emily at least another year to save up enough to get him admitted to a private hospital. "This is National Health?" says Mr. van Tecqx...in a rather minimalist scathing indictment.
The stage is now set for....The Fateful 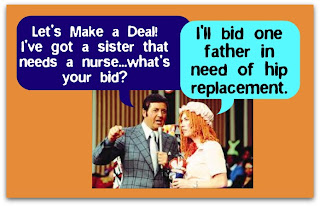 Bargain. Orthopaedic surgeon Mr. van Tecqx will replace both of daddy's hips in return for Emily traveling to Holland to babysit/nurse Mr. van Tecqx's nineteen year old sister - who is recovering from a mild case of POLIO (in 1989!!????). The bargain should take a few months to accomplish - hips are to be replaced one at a time and little sister Lucilla needs to start walking. It will only take Dr. van Tecqx a few hours for the hip surgeries...but it will take Emily many grindingly long weeks of physio and cajoling to get the sulky Lucilla up and about.
Delft turns out to be Mr. van Tecqx's home town, but Emily doesn't get a lot of opportunity to go sightseeing - at least not at first. Mr. van Tecqx has thrown her in at the deep end and neglected to any arranged time off. That's par for the Neels course...Lucilla is spoiled and inclined to be lazy, sulky and tantrum throwing. Lovely personality. Lovely person to work with. I have to give credit Lucilla some credit - she may be a pill, but she's never deliberately mean (which is an encouraging sign in a potential future in-law).
As soon as Emily gets Lucilla tucked into bed, Mr. van Tecqx hauls her to HIS MOTHER'S HOUSE! 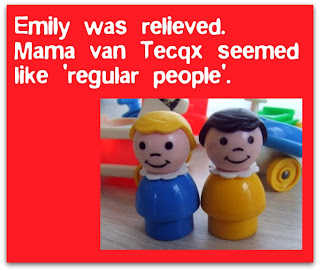 It's late, Emily's tired, and as plain as plain can be...but what's a girl to do? Mama van Tecqx may be dressed elegantly, but she's just as plain as Emily...Editor's Note: And now I can't get these lyrics out of my head:
I want a girl
Just like the girl who married dear old Dad.
She was a pearl
And the only girl that Daddy ever had;
A real old fashioned girl with heart so true,
One who loves nobody else but you,
Oh I want a girl
Just like the girl that married dear old Dad.
Not a lot happens in Delft. Emily spends her days, her looong days, working with Lucilla. Showering her, dressing her, reading to her, exercising her, suffering through her tantrums. Mr. van Tecqx comes back from where ever it was he had gone - just in time for Sint Nicolaas! The entire van Tecqx clan comes to celebrate - and enjoys watching Sebastian (Mr. van Tecqx) watch Emily. Y 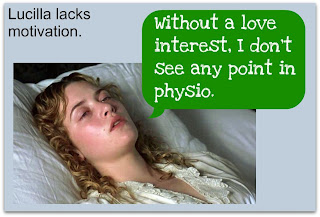 es, his family sees which way the wind is blowing, but they're pretty good at keeping their own counsel. Mr. van Tecqx takes Emily for a walk in the evening - in the cold - her first glimpse of the city. This is the first of many lecture tours of the city...all sorts of interesting nuggets of historical significance are bandied about...but hardly romantic. Nevertheless, Mr. van Tecqx plants a kiss on Emily, much to her consternation.
Emily is Emily helps Lucilla scoot down the stairs on her bum. Editor: Which brings to mind a Hanna Betty brother who is crippled with cerebral palsy - his method on the stairs is to go down on his stomach, head first at a rather good clip.
Mr. van Tecqx brings his houseman home to flirt with Lucilla. The houseman is just what the doctor ordered - he gives Lucilla a reason to work on getting better. And a reason to discuss the 'L' word with Emily. Love. Lucilla has fallen in love at first sight. Do you believe in love at first sight, Emily? Sure. Have you ever been in love? Dawning Realization! Dawning Realization! She can't admit it to Lucilla, but by golly, she's in love with Mr. van Tecqx (no, she doesn't call him Sebastian - even in her thoughts).
To Catch a Thief!
Emily sees a suspicious stranger casing the house one night. Instead of calling the local gendarmes, she goes outside and taps the thug on the shoulder - which earns her a black eye, but not before she bites him and kicks him in the shins. Heavens, if she'd kicked a little higher she might not have 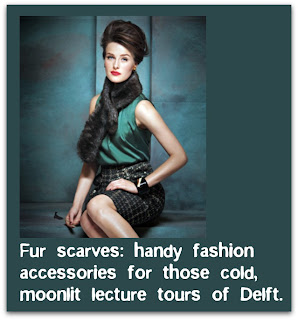 gotten the black eye. Mr. van Tecqx hears her scream and shows up in time to wallop the miscreant.
Mama van Tecqx stops by to visit - to check up on Emily and her shiner. I forgive her for being secretly smug. It's adorable.
The holidays are coming up fast...Mr. van Tecqx gives Emily a fur scarf for Christmas...much better than the impersonal leather photo frame she gives him.
Back to England - it's time for Dad's second surgery. Emily cries herself to sleep on the ferry. Mr. van Tecqx conceals a grin? Emily has fulfilled her part of The Bargain, now Mr. van Tecqx will finish up his part. 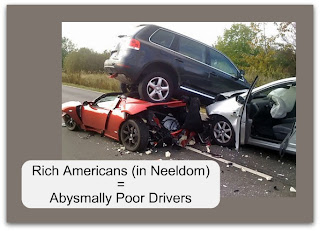 Story of 1st wife. Oh, did I forget to mention he's a widower? Yes, ten years previously (when Mr. van Tecqx was a lad of 24), he married a flibbertigibbet who left him for a rich American with poor driving skills. By the way Emily, I would like to talk to you after the operation.
Now that Mr. van Tecqx is done with his portion of The Bargain, he can finally declare his Love. He's really pretty adorable -
Him: I fell in love when I first met you.
Her: You could have said!
Him: I've had a hard time keeping my hands off you (thank you, Betty!).
Old Man (walking by): Give 'er a kiss, guv.
Him: Marry me? Say yes, darling.
Her: Yes, darling.
The End.
Rating: In the words of the late Douglas Adams, 'Mostly Harmless'. The Fateful Bargain is 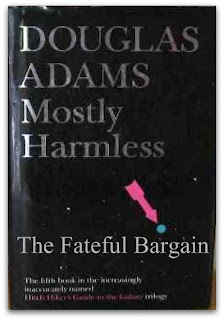 generally non-offensive. It would have been much improved with a bit more give and take between the protagonists...and a little less Lucilla. A dive into a canal to rescue a puppy with Emily being sick on Sebastian's shoes might have just done the trick. Mr. van Tecqx is occasionally adorable, but prone to lack of communication - I will give him a pass on that, seeing as how he was in a quasi business arrangement with Emily. Emily is sensible and reasonable, she does give way to bouts of tears, but only when it's reasonable to do so. Baby sister Lucilla is a pill - inclined to be difficult and sulky (although not downright mean). Mama van Tecqx is cute as a button - but we don't see quite enough of her. The 'other woman' is pretty much a non-starter...she is only around a couple of times to dispense rudeness. That sort of sums up the book for me - lots of potential that isn't quite developed enough. I still liked the book for an occasional re-read. Average. That's the word I'm looking for. Average. I'm giving it a treacle tart on the strength of the ending, but I totally get it if you think it's worth more...or less.
Fashion: Besides some depressing overalls, girlfriend has a sum total of two (2!!!) dresses. A navy needlecord and a grey wool jersey, both from C & A's last sale. She manages to tart up the grey one for Christmas by purchasing a rose coloured scarf and matching imitation leather belt and grey velvet slippers.
Food: Salmon mousse in a bed of lettuce, breast of chicken in aspic glaze, nougat glacé with strawberries and topped with cream, a can of beans, scrambled eggs on toast, speculaas, chicken soup with hot rolls, grilled trout with pepper sauce and light as air castle puddings.
Posted by Betty Debbie at 5:00 AM