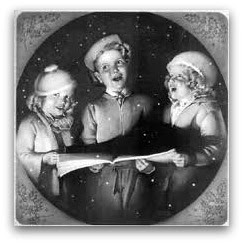 Damsel in Green and Caroline's Waterloo both feature a heroine who can thump out Christmas carols on the piano with great verve - apparently by ear...or from memory.

I love Christmas carols...I like singing in the choir at church - we get to start practicing Christmas songs as early as September some years (yay!)...that said, I don't want to listen to Christmas songs before Thanksgiving - I don't want to get sick of hearing them. I used to buy at least one Christmas CD a year - I love having a variety of styles and songs to listen to. I especially like being able to make my own play lists on my ipod, picking and choosing my favorites from all of my cd's.
I thought it would be fun to share our favorite Christmas tunes (title AND artist). I'm pretty sure I still have a little bit left from my last itunes gift card, and I wouldn't mind spending it on some new holiday songs.
I'll start with a few of my favorites:
God Rest Ye Merry Gentlemen/We Three Kings by Barenaked Ladies and Sarah McLachlan - a surprisingly great arrangement.
Hallelujah Chorus (Handel) sung by Mormon Tabernacle Choir - my favorite 'belt it out' song...it's so much fun to sing (even though it's not technically a Christmas song). Here's a flash mob version that I just found that is pretty darn awesome.
Go Tell It On The Mountain - Dolly Parton (I especially like it when the tempo increases)...I like to think this helps me get in touch with my Southern roots.
The 12 Days of Christmas - Straight No Chaser (sure it's silly and they never actually sing it straight through (which is a good thing)...I do like me some acapella...))

There are tons more that I love - and one that I'm still waiting for a rendition that I can get behind (O Holy Night - I want it sung by a tenor who can belt it out of the park).

Now it's your turn...what songs help you get in the Christmas spirit?