The Edge of Winter has a conspicuously menace-prone elderly relative. Match that with Christmas movies and what we get is:
It's a Wonderful Life (1946) 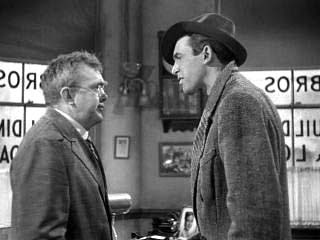 Tante Maybella, let's just walk through your day and maybe
you'll remember where you last left my fiancee...

Uncle Billy. Without dodgy Uncle Billy losing $8,000 to evil Mr. Potter we've got no story. Notably, Uncle Billy's alternate life--the one without George Bailey (cough*Crispin*cough) there to help him life a life of near-productivity--has him being a resident in an insane asylum.

Kidding aside, I adore this movie and fall in love with Donna Reed right along with our reluctant hero.

I'd just like to say that I have nothing (NOTHING) to do with the pick for The Fifth Day of Christmas. Betty Debbie did it! (Betty Keira is ducking the shoes that are flying from Betty Debbie's direction. Betty Keira is quite agile.):

Babes in Toyland (But not the adorable Annette Funicello one. No, the 1986 one with Keanu Reeves and Drew Barrymore which she insists has a certain charm) 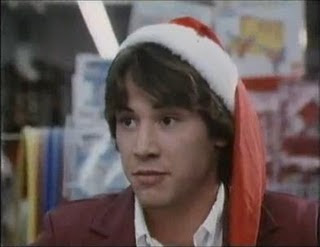 Woah-ho-ho.
There is a snowstorm (as in The Fifth Day of Christmas) and Christmas themes. Betty Debbie doesn't know how Keanu Reeves even got to Bill and Ted's Excellent Adventure after appearing in this. Let's all watch it and confab. Maybe it does have a winsome way...
Betty Debbie here...my only excuse for having watched this movie several times is that my children (most notably my only daughter) watched this one fairly often in the early 1990's. I think we got it from McDonald's (maybe not with a happy meal, but some promotional gimmick). It's soooo bad, that it's unintentionally hilarious. Also, it's kind of fun to see a very young Keanu Reeves and an even younger Drew Barrymore. For those of you with Netflix, it's currently available for streaming.
Posted by Keira at 5:00 AM