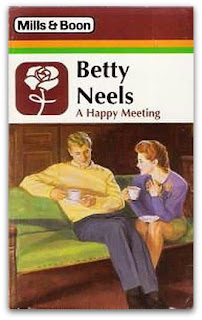 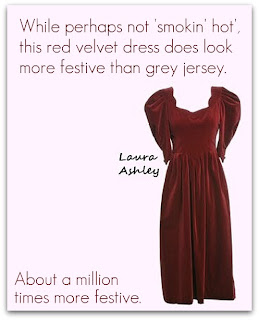 First of all, I'd like to petition Harlequin to change the name of this book to something slightly more memorable. My choice? The Girl Who Forgot She Had a Smokin' Hot Red Velvet Dress and Wore a Grey Jersey Instead. Too long? No, what was too long, was the time it took me to read this book - nearly a week.

Cressida Preece aka 'Cressy', needs a ride to Minton Cracknell in a bad way. The book opens with her seated on the side of the road with a mangy abandoned dog and a badly sprained ankle. And so begins a Cinderella story.
Cressy (ugh, as a nickname it's not quite as bad as Tishy, but a close second) lives in ye olde family home...with her wicked stepmother. Daddy is dead, and had the bad judgement to leave all to the second Mrs. Preece...with the vague idea that she would provide for Cressy. Yet another example of poor financial planning in Neeldom. He did leave an annuity for Mrs. 'Moggy' Mogford...ye olde family retainer. Mrs. Preece has manipulated Cressy into staying on as an unpaid servant by implying that Moggy will lose everything if Cressy leaves. So Cressy stays. In two years Moggy will be sixty and supposedly eligible for her annuity, and Cressy can get a life. Not that she has any skills. Of course not. 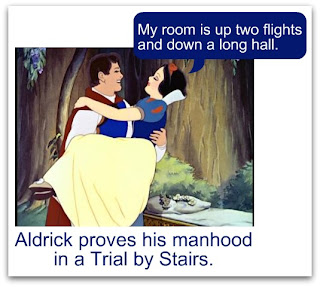 Aldrik van der Linus looks respectable enough - he wraps up Cressy's ankle and bundles her into his Bentley and trundles off to Minton Cracknell and ye olde family home. He is surprised to see the daughter of ye olde house is relegated to a bare little garret of a room. Something is fishy here, but he's not sure what it is. He does call the local doc and tells him of Cressy's injury as a little insurance that Cressy will be taken care of properly. It's a good thing he does - Dr. Braddock stops by to check up on her - only to find her sitting up in bed polishing ye olde family silver epergne. Dr. Braddock promptly enlists the aid of Moggy in carting Cressy downstairs and off to hospital for a nice little vacation/convalescence.
Aldrick may not be able to remember exactly what Cressy looks like, but he does remember a beautiful pair of eyes...which prompts him to do a little sleuthing and find out why Cressy is content to play Cinderella. His grandmother, Lady Merrill, is a willing accomplice. She provides the 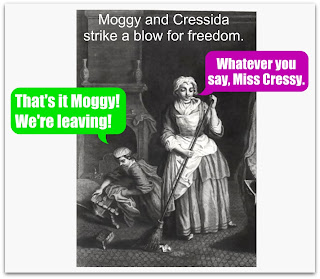 name of ye olde family solicitor - Mr. Tims, who happily divulges privileged information. Aldrik pulls a few strings...greases a few palms...has Mr. Tims inform Moggy and Cressy (ugh) that Moggy's annuity is ready and waiting and btw, Cressy has 100 pounds ready and waiting for her. They both drop Mrs. Preece like the live snake that she is. Moggy is off to live with her sister and Cressy has a job! What? You heard me, a job. She is to be a temporary companion to Lady Merrill. Yes, that Lady Merrill. Lady Merrill is rather delightful, but Aldrick never makes an appearance...only by phone. Cressy has no idea that this is a made up job OR that Aldrick is at all involved or related.
With this toehold into employability Cressy is not too surprised at another job offer as a companion - to a lady in Holland. Unfortunately, this job will not end well. Well, it wouldn't...seeing as how Jonkvrouw van Germert is Nicola van Germert's aunt. Nicola? She Who Would Like to be Mevrouw van der Linus. Aldrick has a lost a few credibility points with me by allowing himself to be somewhat duped by the fair Nicola. He talks about Cressy's situation with Nicola!! Ouch. Nicola suggests that instead of taking Cressy up to Aldrick's friends in Friesland, Nicola's aunt would be willing to take her on as a companion much closer to home - he can keep tabs on her. All this concern would be touching if it didn't hide her true motivation - which is to keep Cressida close so that she, Nicola, can keep tabs on her.
Cressida is somewhat dismayed to find that being a companion to Jonkvrouw van Germert is nothing like being Lady Merrill's companion. Jonkvrouw v G. treats her more as a servant and less like a lady... 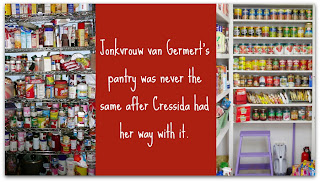 Aldrick stops by to check up on Cressy and finds that she's cleaning out the pantry...the Jonkvrouw goes on the defensive and brings up the fact that Aldrick was responsible for getting her not only her current job but also the job with HIS GRANDMOTHER!! Of course Cressy feels humiliated...but she still manages a magnificently dignified exit. Nicola coos at Aldrick...she'll talk to Cressy and smooth things over - Aldrick agrees. Aldrick agrees??? Yuk. Nicola returns to talk with Cressy and lays it on with a trowel...Aldrick told me all about you, Aldrick and I have no secrets from each other, Aldrick pities you... Cressida marches up to her room, packs her bag and leaves. She's got enough money to get back to England.
Aldrick catches up with her before she gets on the ferry - and hauls her up to Friesland the next day. Cross-over characters Tyco and Charity van der Brons (from The Final Touch) are happy to put her up for the night. We get to see a fair amount of the van der Brons household, which is lovely. Charity is quite pregnant. Cressy and Charity hit it off and Charity is able to reassure Cressy that even though her potential employers have six children, they are quite nice. Editor's Note: I have six children and am usually considered fairly nice. If I had a cook, housekeeper and a nanny plus Cressida, I would potentially be even nicer.
The ter Beemstra's are a nice family. As far as I could tell, Cressida's main duty is to speak English with the children. Much better than cleaning pantries. Cressy spends her days off over at the van der Brons house...which is where Aldrick finds her. He runs her over to his own ye olde ancestral 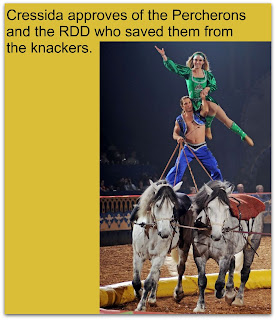 abode...where Cressy is treated to the House and Garden Tour O' Love. Aldrick's olde family retainers fall in love with her - she's much nicer than the dread Nicola. When Aldrick drop's Cressy back off at the van der Brons Charity peeks through the window and sees Aldrick giving Cressida a kiss. Tyco tells her to adopt a wait and see attitude. Cressida enjoyed being kisses by Aldrick...but was unsure of why he kissed her with such satisfaction (dang, now I've got the Rolling Stones in my head...). Aldrick knows why...he's known for weeks that Cressida NOT Nicola is the gal for him. He's just got to talk to Nicola (always a bad idea) and let her know that as far as she's concerned, he's not the man for her.
Meanwhile, Christmas is fast approaching, Cressy keeps herself busy by teaching Christmas carols to the ter Beemstra children...Aldrick keeps himself busy by going to England to spend Christmas with Lady Merrill. This absence allows Cressy's heart to grow a little fonder - she realizes she's in love with him. Just in time too. The local domine tries his hand at chatting her up on Christmas - but frankly, he's a non-starter. Her heart belongs to Aldrick.
Aldrick does show up on New Year's Eve - Cressy is treated to a kiss on the cheek and enigmas. Argh. the deal could have been sealed, but there's another 30 pages to get through. So...let's have a bit of drama. 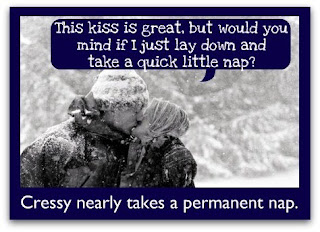 Blizzard Rescue! Nanny and Baby haven't returned from a visit to Nanny's sister's house and a blizzard is blowing up. Cressy volunteers to go find them - which she does - hunkered down by a rickety bridge. Too bad for Nanny, but she has a Pott's fracture and can't walk. Cressy heads back for help and runs into Aldrick. Literally. He gets Lucia and hands her to Cressy, then goes back for Nanny. Cressy carries the three year-old until more help comes...then she falls down and goes quietly to sleep in the snow. Aldrick notices she's missing and goes back for her. This would be a great place to end, but gosh, there's still 20 pages to go. Let's sum up:

Him: A waste of time - let's get on with the kissing.
The End.
Rating: A Happy Meeting was just okay for me. Cressida and Aldrick spend too much time apart for me. I do like seeing more of Tyco and Charity, but the attention to other characters just doesn't make up for a so-so hero. Aldrick might not be engaged to Nicola, but the fact that he talks about Cressy to her (granted, he doesn't know he is soon to realize his love for Cressy) is a bit icky. So is the fact that he follows Nicola's advice - against his better judgement. Twice. Keeping in mind that I had oral surgery, houseguests and Christmas over the time that I read this (which didn't help) I'm going to give this one a treacle tart. Your mileage vary.
Food: Mrs. Preece has her daily serving of junket, fairy cakes, cheese rolls, a mouth-watering mountain of a cream cake, erwetensoep, cheese souffle, creme brule, speculaas, roast pheasant, briased celery, ices with whipped cream and nuts and that Dutch New Years treat, Olie Ballen!Fashion: A shopping trip to Yeovil which yields a tweed skirt, a couple of blouses, a woollen jumper...and a dark red velvet dress (purchased at Laura Ashley) which is never heard of again, instead, she wears a grey jersey dress over and over again and bemoans the fact that she doesn't have anything festive to wear during the holidays. Too bad she didn't have a dark red velvet dress...
Posted by Betty Debbie at 5:00 AM