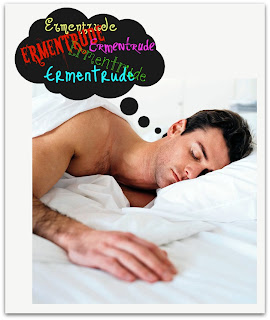 Ruerd and Anneliese have lunch with cross-over characters Mr. and Mrs. Bowers-Bentinck (The Chain of Destiny). They now have 5 year old twins and a baby on the way. The twins eat with them (which is nice) AND they are beautifully behaved. Five year old twins? Beautifully behaved at the table? This IS fiction.

'But you are nice! I suppose I could call you handsome or sexy...' He held up a large hand. 'Spare my blushes...' I don't think I can add anything to that.

'Later, lying in his great four-poster bed, Ermentrude was there again, buried beneath his thoughts and contriving to upset them.' Bed???!!!! Oh my, I'm blushing now, and I definitely can't add anything to this one either. 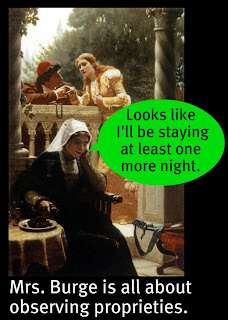 When Emmy is staying the night at Ruerd's house (after her concussion and the robbery), he has Mrs. Burge stay the first night (medical necessity) but doesn't ask her to stay again. Mrs. Burge (seeing him and seeing her and seeing which way the wind is blowing) insists on staying another night. Evidently Mrs. Burge is part of that long line of 'help' that not only come in daily to oblige, but also do a bit of chaperoning on the side.

Ermentrude plays 'Snap, Beggar Your Neighbor, and Beat Your Neighbor Out of Doors' (card games) with Ruerd's niece and nephews. It's like she's the cruise director on The Good Ship ter Mennolt, in charge of making sure the sailors are happy with their portion of hardtack and salt pork. I have 3 kids coming home from boarding school (ha! not really - they're coming home from college), this weekend - they'll be here for 2 weeks. I could use Ermentrude, in her guise as cruise director, to help keep the troops entertained. I would also like a spare bedroom or two from Ruerd to help with the overflow... 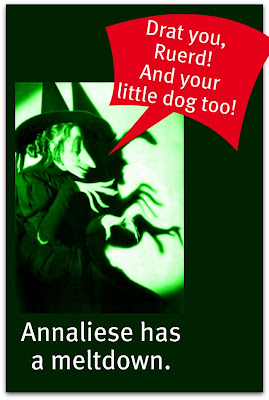 Annaliese to release him from their engagement even though he was hesitant to do so before because it was dishonorable. (Happily, Annaliese was snogging a long-hair and he catches her so no need to welsh on his word...) Greater love hath no man, than he be willing to dump the wicked witch...let's assume he didn't go after her with a bucket of soapy water.
Posted by Betty Debbie at 8:00 AM