Betty Magdalen, in a brazen bit of pandering (which The Founding Bettys wholeheartedly approve), whipped up a delicious bit of Christmas confection for our contest. Buckle your seats:
The Miracle of BettysDay 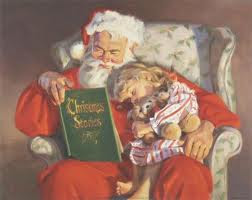 Gather round, children, and I’ll tell you the story of the Founding Bettys, and the miracle of BettysDay.
It started around the holidays back in Oh-Nine, I think – those nice sisters in the Northwest got a little bored taking inventory in their bomb shelter, uh, I mean larder, and decided to start a blog...
What’s a blog? Oh, dear, that’s right. You’re all so young. I keep forgetting.
Well, a blog was a way for people to communicate back before Steve “iMake” Jobs, Mark Zucker-Facebook, and those Google-Eyed boys had us all wired directly into the Internet. The “blogger” would write something – no, I will not explain what “writing” is; go Wiki it – and post it on the blog and we’d all read it.
So, as I was saying, Betty Debbie and Betty Keira thought long and hard about what to blog about and they decided to blog about Betty Neels.
Betty Neels is the patron saint of romance, although we didn’t know that then. We just thought she was a nice woman who’d written some nice books that we all liked to read. But when the Founding Bettys started their blog, which they called “The Uncrushable Jersey Dress” – no, not Jersey the island and not Jersey the cow, jersey the fabric, preferably silk – we all started to read it.
And that’s how learned of the miracle of BettysDay. For on that day – the 100th anniversary of Betty Neels’ birth, which we all celebrated in our own ways -- we discovered that we’d started a movement. Slowly, young people stopped going to Brighton, or at least not with nasty housemen named Nick. People appreciated Dutch architecture more, and the value of taking better care of retired donkeys. We all learned what to do if we accidentally fell into a canal, and how to suture our own wounds. And we learned to exchange chocolate letters at Christmas, although people named Irene and Isaac felt a bit hard done by, compared to the Wilmas and Maximilians of the world.
That Christmas, the one just three months after BettysDay, the Founding Bettys held a special contest. And I wrote something – what do you mean, you didn’t Wiki “writing” yet? – as my entry in that contest. And the greatest miracle of all was that I won.
Yes, I did. Well, I was smarter then, okay? Use your imagination if you have to.
I won a pinecone. But not just any pinecone. I won “Pinecone Chapter 4.”
Yes. That very same pinecone that we revere to this day. It hangs in the place of honor, along with the china figurine that my nasty stepchildren broke when they were turning over a new leaf after they discovered that I never tattle. That pinecone helps us all to see the beauty in mousy hair untidily bundled over a face saved from plainness by very luxuriously-lashed green eyes. That pinecone lights our Dawning Realizations and gives us the courage to drive the Rover all on our own when we’re convinced that he is still in love with that willowy (but too thin, really) blonde. And it’s Pinecone Chapter 4 that reminds us every year that the true message of Christmas isn’t the gifts or the chocolate, it’s the honking great Bentley that makes quick work of the drive to Harwich to catch the ferry.
And we wouldn’t have Pinecone Chapter 4 if it weren’t for the Founding Bettys, and for the great Betty Neels herself. So thank Betty Neels for being born, and for not finding books she liked at her local library, thus forcing her to write 134 of her own, which we all read, and the Founding Bettys blogged about.
Now, go Wiki “writing” and let me get back to my book. I’ve just gotten to the good part...
Posted by Betty Debbie at 11:00 AM