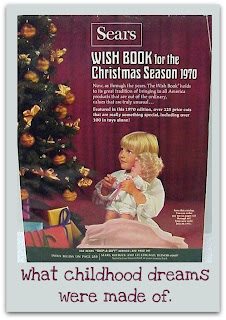 When I was a little girl (back in the 60's and early 70's) I loved getting the yearly Christmas catalogs in the mail. Betty Marcy and I would call a temporary cease-fire to our sibling rivalry and go through the pages together. We had games we would play - seeing who could pick out the coolest toy on the page, or the most expensive (not always the same thing)...we would make lists of what we would like to get. Mind you, we weren't greedy and being brought up in a family that had raised a tradition of Low Expectations to an Art Form, we didn't expect to get anything from our elaborate lists. Of course, that didn't stop us from wishing.

Eleanor (Roses for Christmas) seems to have had the same type of wish list as we would present to our parents. A few things that we really really wanted (but didn't expect) a few more reasonably priced things, and finally a couple of cheap things, to prove we weren't greedy, ungrateful children. Which we really weren't.

Christmas 1973 was arguably both my worst Christmas AND my best. There were only two presents for me under the tree. One was from my grandmother(might have been something useful like socks), and the 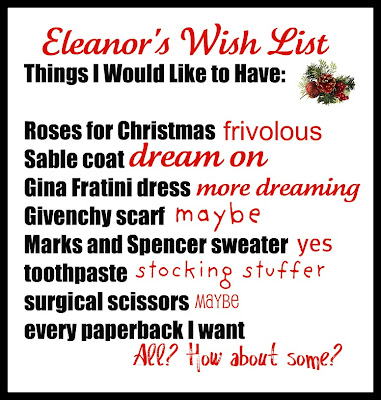 other was from whichever of my siblings had drawn my name that year (the default present back then was a $1 bottle of bubble bath). That's it. Dad handed out presents to all the kids, but he kept having to skip me, because there were no presents to give me. I was just 14 years old...and trying to be mature about the whole thing, but there were definitely some tears that escaped and trickled down my cheeks from time to time. When there were absolutely no more presents left under the tree, my dad pulled an envelope from the tree and handed it to me. It was the first clue to a treasure hunt. The treasure? A very expensive new flute that I had no idea my parents had bought. I knew exactly how much that flute cost ($180 - which was a lot for one child of a large family - especially in 1973), and I knew how much of a sacrifice it was for my parents to get it for me...the funny thing was, I never expected to get a new flute. If it was even on any Christmas list of mine (unlikely), it would have been the equivalent of Eleanor's sable coat.
Posted by Betty Debbie at 10:00 AM