The Mistletoe Kiss:
They go to the Battersea Dogs Home to pick out a pet when Emmy tells Ruerd that he needs a dog. Wiki tells us that it is the oldest and most famous home for dogs and cats in the U.K. and enjoys Royal patronage.The name was changed in 2002 to the Battersea Dogs and Cats Home but I like it's first name from 1860: Temporary Home for Lost and Starving Dogs. The Home receives no government funding and is run almost entirely on donations from the public. 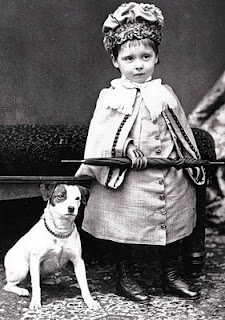 Princess Alice, the grand-daughter of the Home's former patron,
Queen Victoria, with a terrier, Skippy, adopted by her father Prince Leopold.
The professor courts the favor of Emmy's father by showing him an edition of Herrick's Hesperides. Wiki gives us this tantalizing snippet: he was the seventh child and fourth son of Nicholas Herrick, a prosperous goldsmith, who fell out of a window when Robert was a year old (whether this was suicide remains unclear). It's funny how, given enough time, even the most grisly of things become merely curious or even amusing. It is time again to drag out my ancestor scalped by 'dastardly Tories'...

The family celebrate New Year's Eve by having a party and tuning into the BBC to watch Big Ben count down to midnight. It is the largest four-faced chiming clock and the third-tallest free-standing clock tower in the world. Not to quibble or anything but they don't hand around medals for being the third-tallest free-standing clock tower in the world. It reminds me of that competition Scott Hastings' mother hopes he wins in Strictly Ballroom...The Open Amateur Pan-Pacific Latin Five-Dance Championship. It was his year!

The boarding school program includes a song about a boat speeding to Skye and Google didn't fail me! The Skye Boat Song:

Speed, bonnie boat, like a bird on the wing,
Onward! the sailors cry;
Carry the lad that's born to be King
Over the sea to Skye. 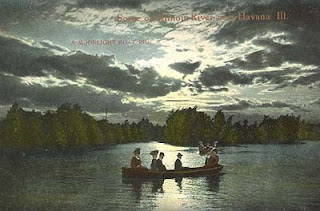 Loud the winds howl, loud the waves roar,
Thunderclaps rend the air;
Baffled, our foes stand by the shore,
Follow they will not dare.

Though the waves leap, soft shall ye sleep,
Ocean's a royal bed.
Rocked in the deep, Flora will keep
Watch by your weary head.

Many's the lad fought on that day,
Well the Claymore could wield,
When the night came, silently lay
Dead in Culloden's field.

Burned are their homes, exile and death
Scatter the loyal men;
Yet ere the sword cool in the sheath
Charlie will come again.