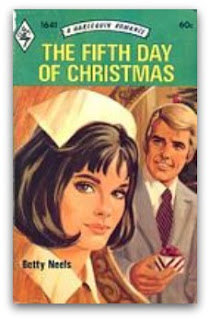 I had a tough time finding time to read this week - Christmas parties, dates with Dr. van der Stevejink, family movie date (Tangled), making pinecones, dentist appointments, eye doctor appointments (why, oh why, do medical appointments come in dense clusters??)...I snuck in a few pages here and a few pages there - not my favorite way to read a book. After a slow start, I was finally able to get down to business and read most of the second half in one sitting. I'm glad I did. Unfortunately for you, dear Bettys, I was interrupted nearly as much while I was writing this post...aargh.
The opening scenes are quite delightful - Miss Julia Pennyfeather (just 22) is escorting an unstablilized diabetic teen to Scotland after having quit her hospital nursing job. After this little job, she's to go to her worthy (and by worthy, she means dreary)brother's house so as to nurse her 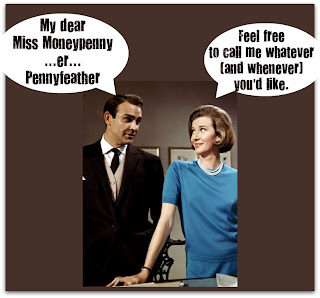 sister-in-law through some post-partum depression. Or something. It's a depressing thought - especially since her brother and SIL are determined to play matchmaker to Julia and a pompous windbag named James. Don't pay any attention to that particular plot device, because we will never meet Julia's brother and his wife or James. Ever. And now I've forgotten them.
Scotland is cold and snowy, but eventually the ambulance men, Julia and her patient get to Drumlochie House - only to find it deserted except for one ancient family retainer. The wind has taken the electricity and the phones...Julia gets everyone busy helping out, then she feeds the group before retiring to her icy bedroom.
In the wee small hours, a knock at the door! Julia puts on her dressing gown and allows entrance to the man of her dreams. Dr. Ivo van den Werff. Guess how old he is. No, I mean it, guess. HE'S TWENTY-NINE YEARS OLD!!! Yes, 29. The Great Betty doesn't actually say that, she just says that he's 'pushing 30'. Weird. We don't have to call Dr. Ivo van den Werff by his full name, things are pretty casual among the small group of snowed-in travellers. Julia spends her time taking care of the diabetic teen and cooking. Ivo organizes the ambulance men and himself to take care of the chores, and the family retainer is marginally helpful. I believe he kills a chicken.
The whole interlude in Scotland is delightful - Ivo and Julia get on like a house afire. So much so that he offers her a job back with him in Holland. Taking care of Marcia. Marcia? Who's Marcia? She's The Unresolved Issue.
Marcia has been living at Casa van den Werff for the past six months (with Ivo's dad and sister)where she has been recuperating from a slight attack of polio (yes, polio again). Marcia the Unresolved Issue needs a nurse to finish getting her back on her feet.
It's really too bad about the instant antipathy between Marcia and Julia. Julia sees Marcia as the fraud she is, and Marcia can tell. Marcia spends the entire book making rude comments about Julia's size. Marcia calls her buxom, robust, stout, plump, hearty...you get the idea. She's a real charmer. Marcia is an unusual 'other woman'. Sure, she's bony and flat chested, has pale blonde hair and colourless lashes and a thin austere beaky kind of beauty...but she's An Intellectual. Her hobbies include: reading the works of Goethe, living in luxury, reading Virgil and Homer in the original Greek, being waited on by Julia, and making out with Mijnheer August de Winter. What? Yes, she's got a lil' sumpen sumpen going on the side. She's just hanging out at Casa van den Werff until the Mijnheer comes up to scratch. Hedging her bets.
So...what's 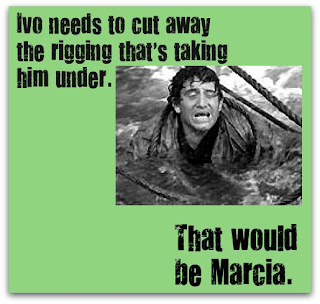 the relationship between Marcia and Ivo? Marcia simpers (gah...I just threw up in my throat a little) and acts coy while telling Julia that she and Ivo have 'an understanding'.
This is where it gets a bit dicey...after Marcia got polio, Ivo went to Edinburgh for six months. Six months with no visits back to Holland. Doesn't sound much like a man in love. Not only has he not been to visit in six months, he doesn't act like a man in love. He acts more like the captain of a sinking ship and Marcia is the broken rigging dragging it down. It's time to clear the decks.
Julia has a bit of a tough time figuring out what's going on. She isn't quite sure what Ivo and Marcia's relationship is. Are they engaged? Will they marry? Julia can see that Marcia isn't in love...and she's pretty dang sure Ivo isn't either. Let's assume he isn't since he kisses Julia at nearly every opportunity, especially after a fight or quarrel, or well, like I said, pretty much anytime.
Julia goes for a walk one afternoon - it's a balmy December day in Holland. Hah! 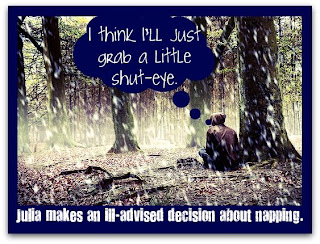 Not. Off she goes into the bike paths and nearly certain disaster. Yes, she gets lost, freezing rain is pouring down and she falls asleep. She wakens to Ivo swearing some beastly Dutch oaths and then pouring brandy down her throat. Of course she's fine - but she does have to endure prosy speeches from Marcia about the inadvisability of impetuous women who are lacking in intellectual powers not giving due deliberation to all the aspects of taking a walk in the country during this particular time of year.
Julia continues to be confused about what the future holds...for her, for Ivo, for Marcia. It's all a muddle. The one thing she's sure about is that she loves Ivo and Marcia doesn't. Despite that, Marcia continues to make a determined effort to keep Ivo away from Julia. Which just goes to show her spiteful nature, since Ivo isn't the one she wants. She wants Mijnheer de Winter in a bad way - badly enough to invite the mijnheer to a family Christmas Eve dinner against Ivo's wishes - without telling Ivo. Julia rushes into Jorina's room (in her bathrobe, hair streaming down her back) to tell Jorina so that she can rearrange seating - Ivo is there, sitting on the bed. Ivo tells her that she'd better get dressed...'If you need any help, I'd be delighted.' *snort*. After dinner entertainment consists of dancing to the 'CD player' (yeah, right...). Marcia does a slow foxtrot around the room and then has Julia spend the rest of the evening putting her to bed. Seems like that would be the end of Christmas Eve for her. Well, it isn't. Ivo made Julia promise to come back down after The Unresolved Issue has retired. He gives Julia his Christmas present to her...a pair of gold earrings with rubies in the center. Do I sense a little forshadowing of things to come?
It's Time for a Medical Emergency. 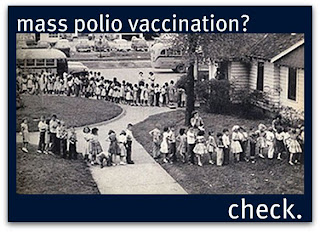 Not only have we been treated to The Unresolved Issue with polio, it now seems there is an outbreak requiring mass inoculations! Julia is recruited to help Ivo with the hordes of children that now need to be given shots - which gets her out of the house and away from Marcia. Marcia's down with that...it gives her more opportunities to be alone with Mijnheer de Winter. Julia accidently sees them in a lip-lock. Marcia moans about how lonely and alone and forlorn and....Julia begs to differ...'that is a load of old trot!" The kid gloves come off and Julia speaks her mind. Words like 'harpy' and 'fraud' are bandied. Marcia tattles to Ivo about Julia's name-calling. Ivo confronts Julia:
Him: Um...I just had a conversation with Marcia. I think you know what it was about...
Her: So???
Him: Did you call her a fraud and a harpy?
Her: Yes.
Him: May I ask why?
Her (flippantly): No harm in asking.
Julia can more than hold her own in nearly any situation which is a good thing, because she's abou 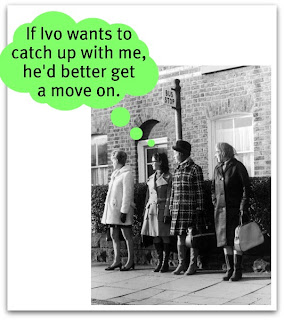 t to have it out one last time with Marcia. Ivo overhears...The Unresolved Issue is resolved, but while Ivo and Marcia are resolving, Julia packs up her troubles in her old kit bag and runs off to the bus stop enroute to England. It takes Ivo a little bit of time to catch up with her, because he makes a detour to pick up a few more GOLD RINGS...bringing the total to 4 - with an option on the 5th. Lovely closing scene where Ivo pleads for a quick wedding, 'please don't make me wait, Julia', some satisfying kisses. The End.
Verdict: Although a little uneven in the pacing (that could very well be due to my irratic reading (and writing) schedule this week), I really enjoyed this one. Marcia is one of my favorite villainessess - while not the most wicked, she does get quite a bit of page time. Julia, or as Ivo calls her, The Magnificant Miss Pennyfeather, is pretty delightful (even though she has way more patience with Marcia than is humanly possible). Queen of Puddings!
Fashion: Not a whole lot to work with here. Julia spends most of the book in her nurses uniform. She does have a deep rose wool dress and a brown wool dress, a Jaeger coat and skirt of pleasing turquoise and brown, a top-coat and a fur bonnet. Marcia declines to wear a jersey dress.
Food: While snowed in at Drumlochie House, Julia bakes bread, makes soup and omelettes, jacket potatoes and a baked rice pudding. Christmas Eve dinner consists of oyster soup, filet of beef Meurice, and gateau St. Honoré. Christmas dinner is roast turkey, chestnut stuffing, cranberry sauce and what Jorina describes as 'English vegetables culled from an old copy of Mrs. Beeton's cookery book.'
Posted by Betty Debbie at 5:00 AM