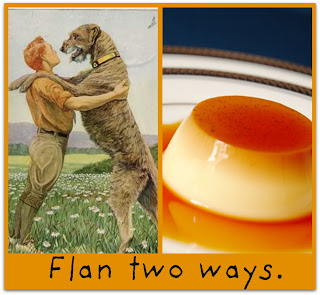 Fulk's Irish wolfhound is named Patrick O'Flanelly. They call him Flan! According to wisegeek: Flan is a baked custard quite similar to crème caramel. It is typically made with eggs, cream or milk, gelatin and vanilla. Often flan is synonymous with crème caramel because it includes a layer of burnt or caramelized sugar on the bottom. Little ramekins of flan are then inverted, so the crunchy sugar is on the top.
Flan is quite popular in Latin American countries, but its origin is French. Often Flan served in Latin countries or restaurants does not have the caramel sugar layer, but instead is simply plain, more resembling Italian Cream.
Flan the Irish Wolfhound looks like a dog my aunt had(a Russian wolfhound named Boris). Boris was tall enough and big enough to get hold of the Thanksgiving turkey that was being rinsed in the kitchen sink. We had to make do with only one drumstick that year. 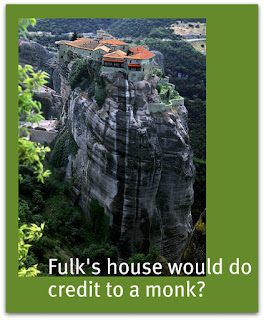 'Grooviest' (Groovy and similar variations are used like three times (by the younger kids)). Unlike Betty Keira, I'm old enough to remember people actually using the word 'groovy' non-facetiously. By the time I was old enough to use it in a sentence, 'groovy' had gone the way of the 'bees knees.'

There are allusions to co-habitation. She asks who else lives at his house. 'I must disappoint you--my household would do credit to a monk.' I don't think I have anything to add to that except for a cool picture of a monastery.

Best lines in the book (Describing his offices): '...richly carpeted, nicely furnished, too, with 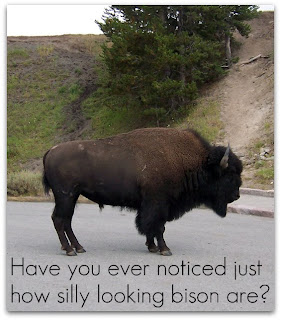 flowers and plenty of magazines--none of your upright chairs and last year's Woman's Own laid out like a fish on a slab with a gas fire burning economically low'. I've been in my share of doctor (and dentist) offices/waiting rooms. I'm not overly impressed by fanciness...after all, I'm helping to pay for it - but I don't like stark utilitarianism either. The most hilarious decor I ever came across was at an endodontist's office. It was in a fairly new building and they were going for a 'western' theme. The waiting room was not overly large - maybe 12x12 -ish but it did open onto the reception area which might have made it seem larger except for the ABSOLUTELY REAL STUFFED AND MOUNTED BISON HEAD over the fireplace. That thing was HUGE. I really felt sorry for the receptionist - the mounted head was staring right at her. All day, every day. Here's a picture from our summer vacation. I wish there was something to show the scale better - just believe me - the head is ginormous. Especially in a small waiting room.

The villainess is named Baroness Oss van Oss. Let's just hope the poor lady didn't have a lisp.
Posted by Betty Debbie at 8:00 AM