I was fifty pages into this book before I realized which one it was. My heart, sailing gaily along, wafted on the updrafts of delightful banter and sizzling chemistry, thudded to the pit of my stomach. Ugh. This is the one with the worst ending in Neelsdom. 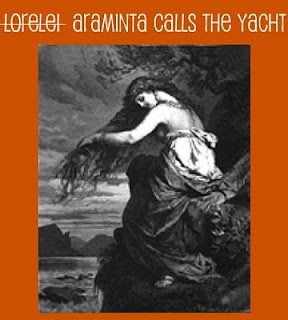 Araminta Shaw, 25, is, like any good Lorelei, hailing sailors to a watery doom. Having found a lost child at the ocean's edge, she splints a broken leg, dismisses the possibility of cliff-climbing with all that dead weight on her back and looks through the darkening night for help.
Professor Crispin Van Sibbelt, nudging 40, points his little rubber dinghy inland and fetches up before her. 'You silly little fool. Don't you know those cliffs are dangerous?'
Scathing remarks follow acid-laced observations as they maneuver the little girl aboard his yacht and our heroine (who did, after all, follow first aid protocols with ingenuity) is grinding her teeth. Araminta wonders, who put his knickers in such a bunch?
London:
Araminta returns to her nursing job (she was on a very dreary-sounding vacation with auntie and father--the kind of death-to-a-social-life lolling at the inn vacation) and opens the door of her modest semi-basement flat to the vast and handsome yacht-owner. Having a yacht is not its own calling-card for respectability, evidently, and she only draws the chain back when she is reassured that he was sent by her auntie. 'I wanted to see you again.'
Thereafter, he pops in and out of her life, bringing delicious food, a persistent manner (a must since she constantly tells him she's not sure she likes him very much (in much the same way as a 12-year-old girl, when asked if she liked a certain classmate, would blush furiously, swear she didn't like him and wish him death for good measure)) and offers of help around the house.
This is, by far, the best part of the book with little moments that make you laugh aloud. He is sort of pursuing her and she is sort of resisting. ...she told herself that she couldn't bear him at any price--she would make that quite clear the next time they met.
Holland: 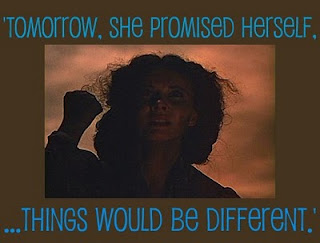 Araminta is asked to nurse her Cousin Thomas' failing wife Thelma...in Holland. So, she hies off to Amsterdam and lands herself in a domestic imbroglio. Thomas is a pinchpenny who can barely rouse enough feeling for his dying wife beyond a niggling suspicion that all this is costing him money. Thelma is a dear and set to die anytime from incurable leukemia. She is relieved that Araminta is there so that she can die in peace instead of being asked about the laundry status. And if it takes crossing swords with Thomas every stinking day, Araminta is going to see that things are different for Thelma. Champangne, new dresses, enticing eats...the lot. Thomas turns puce at the expense. (Though, to be fair, he sounds like someone with a liver complaint.)
Naturally, Crispin is the specialist who sees Thelma.
Thelma dies. 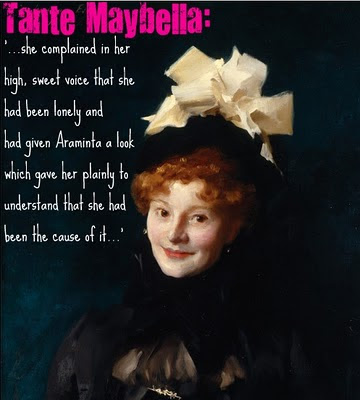 Crispin, not one to waste any opportunity, whisks Araminta away from her pre-funeral housekeeping as often as possible and, at one point, brings her back to his home to spend the night.
Never fear! He has a chaperon! Tante Maybella! (Are all these exclamation points convincing you that she is a good idea? Me neither.) Ah, the good Tante. She's all my least favorite feminine affectations wadded into a cozy knit cardigan. Sweet, high-voiced, doll-like, back-biting, vicious...Crispin seems oblivious that Tante Maybella (who has TWO homes of her own that she doesn't want to live in--TWO!) is leaking toxic waste all over Araminta like a rusty 70s era industrial drum.
But, despite the prospect of infelicitous in-law relations, Araminta tosses her bonnet over the windmill for Crispin. He would probably be a difficult husband, but she saw no reason why she couldn't manage him. Oh, I quite like her.
But back to Tante Maybella. Crispin notices some chilliness but offers the pointless (if interesting) bromide: She can't help but love you in time, but she has to get used to you--the idea of you. Kiss!
Before heading back to England, Crispin makes some not-so-very-vague suggestions about a possible joint merger of their assets. 'Don't say anything. When you're back in England, whatever you feel now, you will probably forget me.' 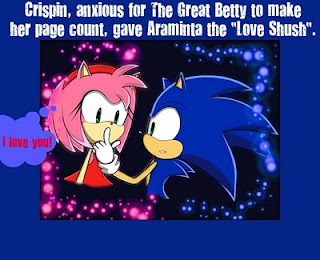 Editorial Note: Okay, I take considerable issue with this. He does this cheesy boy band ballad thing (I'm imagining Boyz II Men: 'Baby, baby, hush now. You and me, girl, don't need to talk...') a few times and implies that she's a 'green girl'. Um, Professor, she's a babe. Moreover, she has probably been chatted up by every houseman, registrar, junior banker, bachelor clergyman and married anesthesiologist within fifty miles. If she's prepared to say that she loves you, shut-up, gracefully accept and then get down on your knees and thank the good Lord for your blessings.
England:
Crispin sends her roses with a message that needs the decoder ring treatment. (What does it all mean?)
She is asked to attend a friend's engagement party. While dolled up and waiting in the hospital lobby with her ride (her young male ride), Crispin stalks in. Words are flung, naked jealousy is displayed, love's young dream is crushed.
So she quits.
Oh my heck this is so satisfying. Crispin is totally in the wrong here and she's just ripped up her mortgage papers and tossed the lighted match into the dining room. And then he's back (to her father's house this time) for a full-fledged, honest to goodness grovel. (Enjoy the delicacy. La Neels is famously parsimonious with them.)
He asks her to come back to Holland to stay with him and get to know him and, '...hush, baby, I don't want to know what your feelings are...' Okay I made that last bit up...a teeny bit.
Holland:
She stays with Crispin and Tante Maybella and Tante Maybella's 'naked fear' (so awkward when people don't wear a towel to the loo...). And then one day, Tante Maybella (whose very name is beginning to drive me around the bend) tells Araminta that she's so 'suitable'. Picture a five-year-old at a birthday party with a handful of balloons. Now 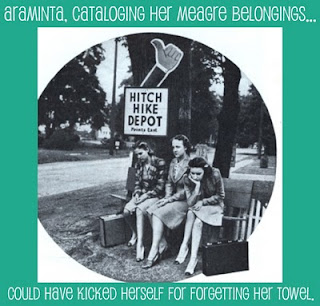 picture someone popping them all. That's pretty much Tante Maybella. A Balloon Popper.
Not done with her evil machinations, Tante goes on to tell Araminta that she's so much more suitable than Nelissa (whose name sounds both flat-chested and made up) whom Crispin really loves and would marry but for his awkward engagement (oh, yeah, they got engaged in there) with Araminta.
Of course she bolts.
Hinterlands:
She takes barely any money, no passport and has no destination. She tries hitchhiking but is too well dressed. Crispin finds her curled up in the stairwell of a tiny roadside stone castle (Visit Amazing Europe!) and pours his anxiety/anger/confusion on her head. To which she replies with inspired aplomb:
"Don't you swear your beastly Dutch oaths at me!"
And there she is--from affianced wife of well-off physician to hot ghetto mess all in one easy day. He drags her home (after much 'No, baby, we'll talk after dinner/breakfast/bath/lunch'-ness) and gets Tante Maybella in the same room. And then, to steal a quote from the Iron Lady, it all goes wobbly. Here's why I hate it:
Anyway, by this time, I'm disgruntled and ready to bean him over the head. But he's got a special license and I guess they can go off and live happily ever after with the cankerous old woman.
The End


Rating: I really, really enjoyed this book before Araminta's dawning realization. She loathes Crispin but, as she glowers at his retreating back, she is probably checking out his bum. Their interplay is excellent and it crackles with energy (death surrounding her, notwithstanding!). And then she realizes that she loves him and a little wind is taken out of the sails (not much wind but all that 'Baby, baby, please don't say anything' stuff is a little dampening). And then there's the sticky bit at the end. Ugh. The end. It wasn't quite as uniformly bad as I remembered: The Great Betty makes running away interesting and funny and tragic all at once so I can't quibble with the writing.
But the last four pages...(shudder)...In a just world, that old lady would have been kicked out on her ear and probably incarcerated in a Home for the Criminally Insane. Seriously. Would you let that woman near your children?
So, though I hate giving mixed reviews, the beginning and middle (and most of the end) earn a boeuf en croute for me, while the last two pages are the thin gruel of tinned soup--probably that succotash tin in the back of your pantry that's been sitting there for ages. The lima beans have probably turned gray and there are little floaty bits of fat...
But if you can mentally write a satisfactory conversation that can make living with a psychopath okay ('Darling, she's got an incurable brain tumor and will be gone by morning anyway...') then this book is well worth your time.

Food: Shrimp bisque, lemon chicken, crisps, artichoke salad, kaas broodje, french onion soup, poached turbot with lobster sauce, Charlotte Russe (the sound of which makes me think of Russian ballerina tartlets for whatever reason), roast beef, baked potatoes, Yorkshire pudding and sprouts. When she runs away her best meal is chips from a paper bag and because the last of her change is bumped from her hand (into the watery deep) she is denied a roll. Brandy warms her up (a myth?) and she eats echte soup and gehakt balletjes on the way to his home again. The servants (possibly saying 'I'm sorry the old bat almost drove you to your death') make vacherin, her favorite dessert.

Fashion: Russet brown suit, Thelma buys a last dress (blue) before she pops off, Araminta buys a russet velvet pinafore dress with a chiffon blouse, a very promising high-necked dark honey crepe with tiny pleats that sounds a beast to dry clean (I have four years experience working in a dry clean/laundry and know whereof I speak), a sage green silk jersey with yet another chiffon bow beneath her chin, and a blue velvet evening gown which sounds a dream to wear.
Posted by Keira at 5:00 AM